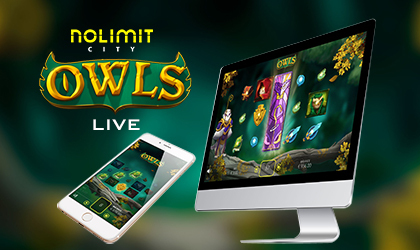 When this year began, a singular provider promised us an industrious and productive year when preparing new, sensational slots.

Fortunately, they once again showed us that their promise is worth one thousand in gold and designed a very interesting game called, Owls.

Who Are We Talking About?

It’s a popular software supplier from Malta, Nolimit City and we are about to give you the full scoop...

First of all, when it comes to visual aspects, we must admit that it is extremely well-executed. It has been made one hundred percent by them, starting from the bottom to the top.

It is mainly designed for those who have an extremely vivid imagination and who like to daydream while playing a game.

It looks totally mystical and magical, due to the fact that its entire world is set in an enchanted place where unfortunately a nation is at war.

Here, Owl soldiers are very brave and they are ready to do anything to defend their wonderous, yet ancient forests.

In order to bring peace into their homeland these beings are ready to utilize every single power, knowledge and wisdom they have and that’s how they manage to keep things stable throughout the game.

What Else Do We Need To Know?

A large scatter that is seen on reel 3 is going to be a decisive factor when it comes to triggering all these bonus features.

Per Lindheimer, Product Owner at Nolimit City commented on this release by saying:

“Owls has been a delight to work on, from the first concept to the super-polished finished product! This game has something for all players; great theme, feature rich content and a sweet win vector for payouts. It has shown that we’ve taken yet another step in our games production capacity and we’re really looking forward to this release.”

We are not going to do that, obviously. We just want to uncover some details about this inventive developer.

Namely, you can find them in Malta and Stockholm and they represent one of the most eminent casino platforms and game developers.

They are incessantly offering top-notch content to their players as well as high-quality services to various operators.

Each game they release (such as Ice Ice Yeti, Fruits Slot, Starstruck), it almost instantly becomes a hit and we are looking forward to getting more inventive games from them.