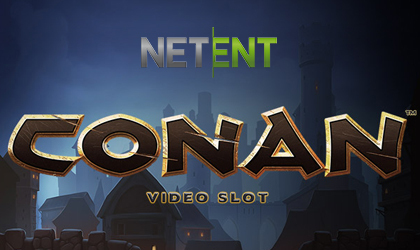 Conan has been the main character of various TV shows, movies and of course, comics. Thanks to NetEnt, we can add slot games to that list! This popular software provider has…

…just released a new title that promises to do this legendary character justice in all aspects that matter.

Fans of the Conan saga will absolutely appreciate the amount of effort NetEnt has put into this game. Starting with the theme, we see highly detailed graphics that depict characters from the story which look exactly like you would expect them to look. The scenery puts this interesting slot in the middle of a medieval village covered in snow.

Although most of the background is static, there are a few animated elements such as the lanterns in front of houses.

Reels and symbol design follow the same level of detail and quality as the rest of the theme. With that said, most of the symbols run with some kind of animation. This definitely allows the game to deliver a more immersive gaming experience across the board. Also, the soundtrack and sound design in general add to the ambiance.

As far as the base game and special features go, this slot offers plenty of interesting options. For starters, this is a 6x4 game that runs on 24 paylines which pay both ways. What truly makes this title special is the fact that the base game packs four different special features. Players who decide to partake in this adventure might potentially win big thanks to Tower Wilds feature, Mystery Symbols, Battle Wilds and Thoth-Amon Feature.

Bryan Upton, NetEnt Director of Games, offered a comment regarding the new release: “With a globally-loved brand and legendary central character, Conan is a perfect addition to the NetEnt portfolio of licensed titles. We’ve stayed true to everything that has made Conan so popular over the last 50 years and added some true NetEnt touches and terrific twists that makes Conan Video Slot an incredibly playable game with a range of fantastic features.”

NetEnt is one of the oldest and most respected iGaming software providers on the market. This company has been operating in the industry for over 20 years, developing and delivering a wide array of high-quality games. Today, they are one of the giants that have managed to gain exclusive rights to trademarked brands such as Narcos, Vikings, Jumanji, Guns n’ Roses and Jimi Hendrix.

The brand’s ability to recognize the needs of its partners and clients has allowed them to release some of the most graphically and mechanically complete games the industry knows about at the moment. So far, this company’s gaming systems have handled over 44.7 billion transactions, which is a feat of its own. Despite all of this, it is always on the lookout for new business partners.