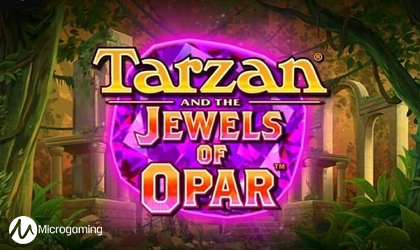 Tarzan is back and this is made possible by Microgaming and Gameburger Studios. Since this is a Tarzan game, the designers put an image of the jungle in the background. Speaking of symbols, there is Tarzan, Jane, Wilds, the Wheel, the Jewels, the Priestess of La, the professor, and classic card royal symbols. It's a cartoon-inspired design, but the designer team has done a very good job here.

It is played on 5x3 grid and 20 active paylines and can be played on all platforms and devices. Tarzan occasionally adds random jungle symbols with its famous jungle roar. Here, players can look forward to getting a maximum win of 5000x the stake. This is a medium-volatile title with a packed with an RTP of 96.38%, which is above the average these days.

"Gameburger have pulled off another incredibly fun and playable game in Tarzan® and the Jewels of Opar™, which has all the hallmarks of a classic Microgaming title. The game was an absolute hit during an early exclusive release period, consistently performing among our top five games per operator in terms of player retention alone. Players are going to love this new spin on a branded classic."

Microgaming is an established provider of online casino games with years of experience. This company is licensed and regulated by the United Kingdom Gambling Commission and is located on the Isle of Man.

With a great team of experienced staff, the supplier has been launching best games every year since its beginning in 1994. Their popular slot games such as Jurassic World and Halloween had started massive gaming traffic.

This game provider offers modern games and participates in community initiatives through the PlayItFoward program. These initiatives, in particular, are aimed at the development of sports, education and charity. The supplier has won several awards. For example, in 2015, the brand was listed in the Guinness Book of World Records for playing the biggest jackpot in the history of online slot machines. In addition to this award, his name deserves many other awards.

Tarzan and the Jewels of Opar
558
PLAY