Max Out the Gain in Thunder Rock by Triple Cherry 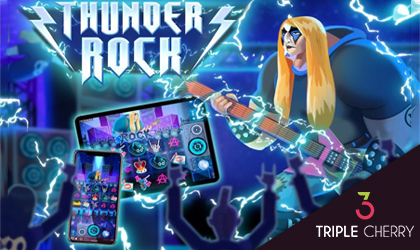 Triple Cherry is coming in hot with a brand-new slot game titled Thunder Rock. If you’ve always wanted to feel like a rock star but never had the chance, this is it!

…offers an electrifying set of features as well as a theme that will put your front and center on a rock stage.

The provider has treated its fans with another awesome release. The new game brings a very unique aesthetic.

Namely, players are placed in front of a…

…massive rock stage that is plastered with walls of amps and speakers. The crowd is going wild as the main rock star shreds a sick riff, blasting the sound of electric guitar far and wide!

While this isn’t the only game out there with this type of theme, it’s fair to say that it is among the most immersive ones. If you ever played Guitar Hero, this is more or less on that level of graphics, if not better.

The symbols are completely unique and unlike anything, most players are used to. There are no card royals in the lower-paying tier.

No, this release brings completely unique symbols that feature cowboy hats, anarchy signs, rocker vests, guns and roses, and much more. Being centered around rock music, it’s only natural to run into a solid soundtrack covering the whole game.

The team behind the brand have made this 5x3 slot fairly tame in terms of special features. It feels like they wanted to focus mostly on what’s going on during the base game.

That being said, there are…

…several features looking forward to when you play the game such as the Light the Lamps feature that is triggered by winning spins.

…a chance to win three record deals and thus get anywhere from 3 to 30 additional bonus spins.

Triple Cherry was founded in 2018, making it one of the youngest studious to join the industry. With a team of talented professionals leading the development, it quickly found itself on a list of highly respected providers. In just two years this brand has built a considerable reputation. Naturally, such success has brought the provider numerous business opportunities.

Namely, they have been expanding in several key regulated markets around the world, forming a sizable distribution network and establishing partnerships with several big players. The company hopes to maintain its rate of growth as the industry expands and evolves.