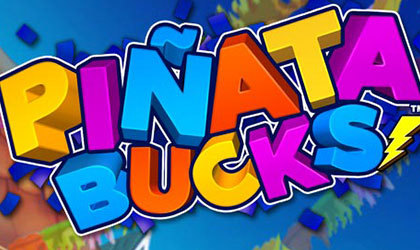 Lightning Box, a studio known for delivering interesting games that offer a different angle to what is most commonly available, have…

…released a new game. Titled Pinata Bucks, their latest release is showcasing what this company is all about.

Players will be rewarded with an exotic base game and much more!

Anything related to pinatas is going to be festive, no matter what it is or how it is being presented. Pinata Bucks has no issues with presentation, to say the least. The studio behind this…

…slot has made it clear that the focus of this game’s theme is pinatas. Speaking of the theme, the supplier didn’t complicate things too much.

… Lightning Box pays much more attention to the mechanics of the game rather than its appearance.

To say that they offer something different would be the understatement of the year. This game features a 4-reel an 4-row main screen that is joined by two secondary reels with 3 rows each.

At its core, this is a 1,296 ways to win game, making it one of the most thrilling titles to hit the market this month.

Speaking of thrills, players will find a slew of special features that spice things up even more. Namely, there are the wilds, the Lock and Spin feature, and finally the four different progressive jackpots!

That alone puts this game in a very distinct category that isn’t seeing much traffic this year.

CEO of the brand, Peter Causley, offered his comment on the release: “We're delighted to release Pinata Bucks, the newest Reelfecta title in the Lightning Box portfolio. With a fun theme, engaging graphics, and huge win potential, Pinata Bucks could be an explosive adventure for players."

The new release is currently available at all affiliated online casinos.

The software provider has been servicing the iGaming industry since it was founded in 2004. Their games are known across the entire industry for having intriguing…

…base game mechanics and cutting-edge core elements. The team behind the company takes great pride in the fact that all of their games are math driven.

Full of mathematicians, this team puts an accent on developing the gameplay theory beyond what the market offers. So far, Lightning Box has released a long list of all-time favorites. This has…

…netted them a rather large following that includes both B2B clients as well as end-users. B2B clients find their ability to integrate games into just about any platform priceless in a time when integration can mean the difference between being in the lead or staying behind.