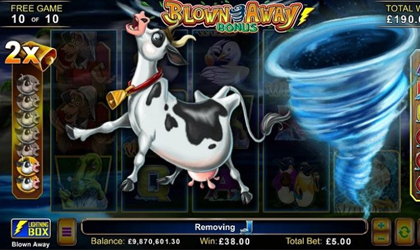 Lightning Box has announced that it has released a brand-new game titled Blown Away.

Much like most of their games, this title is…

…anything but conventional. It tells a unique story and is promising to bring plenty of entertainment to those who decide to give it a try!

The developer is one of those companies that do things their own way. This latest release is a game that tells a story.

Namely, the whole thing starts off with a fishing trip out in the middle…

…of the ocean. However, things don’t exactly go according to plan and the boat is swept up by a hurricane. The graphics used in this slot are colorful, to say the least.

…that appear in it. Symbol design tells the whole story. The lower paying tier features card royals, as usual. The higher paying tier of symbols is all about penguins, monkeys, birds, and even dinosaurs.

As far as features go, there are few that are worth mentioning. For starters, the game runs on a 5x3 grid. The core game is pretty entertaining in terms of win potential. However, those who want to spice things up a bit can rely on the Tornado feature where a tornado lands on the last reel and the lowest card royal symbol is removed.

When this happens, the player is…

…awarded a bonus spin. Speaking of which, there’s also a standard bonus spin mode that can yield 10 bonus spins. Additionally, landing the cow symbols can grant players up to a 7x multiplier.

Peter Causley, CEO, and co-founder of the software provider, said: “We’re hoping this newest title will blow players’ socks off, particularly with the tornado respin feature which could boost payouts by up to seven times. We’re also looking forward to seeing how it does with Sky Vegas before going on a general release elsewhere.”

The new release is exclusively available at Sky Vegas. The global launch is expected to hit on April 15.

Lightning Box is a software provider located in Sydney, Australia. The company has been around since 2004, making awesome games that bring innovative features. The team running the show is comprised of talented mathematicians who are working hard at coming up with new math models that would advance the iGaming industry even further.

So far, it has released a number of highly successful games that have stood out due to their features but also their wacky themes. The new title is a perfect example of what kind of content this studio is known for releasing. With partners all over the world, it is slowly becoming more and more popular.