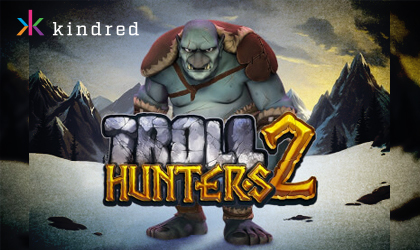 Kindred Group and Play’n GO have partnered up to do an exclusive release of Troll Hunter 2 across Kindred’s platforms. The game is expected to be a complete hit…

…following the success of its prequel. Patrons of Kindred-affiliated online casinos can look forward to a brand-new adventure with all too familiar characters.

Play’n GO’s latest exclusive deal brings everything fans of the prequel could have hoped for. The game is set in the cold north where nights are long and snow covers the mountain riddled horizon. Once again the main characters are fearsome Vikings decked out in the classic Viking clothing, wielding massive axes, swords, and hammers.

The developer went to great lengths to give this slot a compelling theme – one that will captivate players and immerse them in a world of epic adventures. The scenery itself does a lot toward this goal already. However, it is the…

…rest of the details that tie everything together. A large portion of the game is animated. During the game, the troll hunter standing next to the reels is fully animated and so is the snow that’s falling all around.

All ABout That Base:

The true fun starts when players get ahold of the base game and its special features. At its core, this is a 5x5 grid slot that runs on a cluster system similar to cascading reels.

Once a bonus game is activated, players will be presented with a choice of three champions. Each champion brings a different set of benefits. Selecting one of them will trigger the appearance of a troll who comes out during the bonus game.

Ale Rallo, Games Development Manager of Kindred, offered a statement regarding the release: “Kindred has recently invested heavily in the quality of their exclusive games. We believe that product quality is ultimately what customers will recognize and value. This is what will set us apart from the competition and lead the way forward in casino.”

Johan Törnqvist, CEO of Play’n GO, also added his take: “Creating exclusive and localized content isn’t easy. But, with our gaming expertise and Kindred’s knowledge of their market and its players, together we created a title that we knew people would love, and we can already see it succeeding. It’s also a learning experience that will, ultimately, lead to more collaboration and even better ideas and concepts in the future.”

With decades of experience and invaluable knowledge, this company has become one of the most trusted software providers on the market. Their portfolio of games includes a variety of highly successful global hits as well as a number of exclusive releases.

Aside from their gaming offer, the developer also offers full support to their clients and partners.