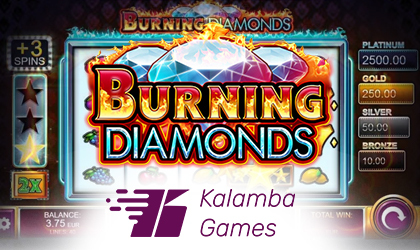 Kalamba Games has announced the release of a brand-new slot that brings on the heat! The game combines a classic design with more…

The studio behind this release aimed at making a volatile game, thus making this title interesting to both seasoned players and those who like a challenge.

Bringing on the Heat:

Kalamba Games used the traditional fruits slot theme for this title, but with a twist. The whole burning theme gives it…

…quite a unique feel despite fruits being one of the most popular slot aesthetics out there.

They didn’t go overboard either, which makes the whole experience fairly balanced from a graphical perspective.

Under the hood hides a proven formula that puts an end to any similarities Burning Diamonds might have with classic fruits. This is 5x4 video slot that features one of Kalamba’s trademark components – accumulating bonus jackpots and HyperBet system. Additionally, players will have the chance to…

The game was developed exclusively for the ORYX Gaming platform and will be available on any of the numerous online casinos affiliated with this network.

Alex Cohen, the COO and co-founder of the brand, has offered his comment on the new release: “At the core of Burning Diamonds is a math-model proven to increase player engagement and retention across a wide demographic, as well as drive up the average bet. With hot wins on offer, this high volatility slot will attract a broad range of players and prove to be a valuable addition for any operator.”

HyperBonus is a very interesting feature that Kalamba first showcased in Bangkok Nights. They were among the first software providers to offer their users the option of simply buying whatever features they wanted.

Doing so has had positive effects on both user acquisition and retention as players received more control over the outcome of the game.

HyperBonus options vary from title to title and…

…come in different tiers. Players are presented with the option of buying bonus spins, bonus rounds and more.

HyperBet is a similar system, only it is limited to adjusting the value of multiplier wilds. Overall…

…both of these systems add a layer of gameplay that is rarely found elsewhere.

Kalamba is a Malta and Krakow-based studio that produces iGaming content for various markets. Despite being founded as recently as 2016, this company has managed to become one of the premier brands in the industry. Such a reputation can be attributed to a large portfolio of high performing titles but also other products.

Aside from delivering high-end gaming solutions, it is also focusing on advanced user acquisition and retention methods.

… gained them a number of big-name customers in a fairly short timeframe. The company is currently looking to expand its operation and reach new markets.