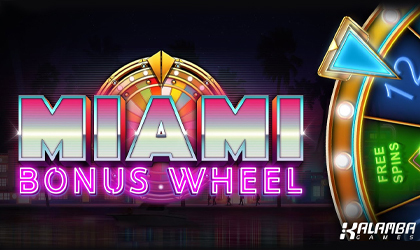 Kalamba Games, one of the leading software providers in the iGaming industry, has just launched a brand-new slot game titled Miami Bonus Wheel!

Packed with all kinds of features, the new game also brings a theme that is all about a summer night in the city.

The developer’s new release adds another brings title to their already impressive offer. Miami is one of the ultimate party cities on the east coast. The new game brings a slice of that party life in a form an immersive reel title. The theme design is all about Miami from the ‘80s when the whole skyline of the city was lit with neon lights.

Speaking of which, neon lights are a major…

…part of this game’s design. As far as the symbols go, this is where the developer went full vintage. It is technically a classic slot and since vintage symbols are a part of classic slot games, it brings exactly what you’d expect to see. We’re talking lucky 7s, BAR symbols, fruits and more.

There are no lower or higher-paying tiers of symbols which ultimately gives this game a very familiar vibe. Last but not least, there’s also the soundtrack which resembles synth music of the late ‘80s.

The 3x3 slot that runs on 10 paylines. Despite being a classic slot, this game brings several bonus features. Players who are looking for a thrill can look forward to a bonus spin mode, a bonus wheel as well as the hyper bonus feature that also triggers the bonus wheel mini-game.

Alex Cohen, Chief Operating Officer and Co-Founder of Kalamba Games, made the following statement: “Miami Bonus Wheel is a high-volatility title that will have wide-ranging appeal among slot players thanks to its slick theme and simple yet intuitive gameplay. Packed with Free Spins and Multipliers to build anticipation and enhance the player experience, this new addition to our ever-expanding slot portfolio encapsulates all the fun and excitement of Miami’s party scene, from the safety of home.”

Kalamba Games is a premier software provider specialized in producing high-quality slots for the iGaming industry. The company is headquartered in Malta and runs offices in Poland. With a growing portfolio of highly successful games, the brand has become one of the leading providers. So far, the supplier has established a solid presence in a number of highly competitive markets around Europe. The company is working with numerous operators who are making up a growing distribution network. With new games being released on a regular basis, it is shaping into an industry leader.