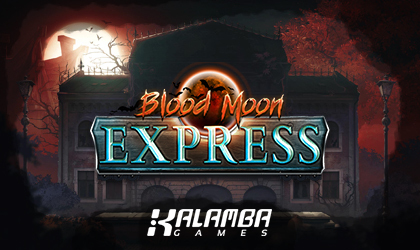 Kalamba Games, a popular content developer specializing in niche slot games, has announced the release of their new game – Blood Moon Express. The game is riddled with…

…vampire-inspired premises and represents this company’s Halloween special for this year. Fans of horror-themed slots are exactly who this release appeals to the most.

Under the Full Moon:

This latest title from the brand represents a perfect treat for those who are looking forward to Halloween. There’s no better way to make this spooky holiday complete than to enjoy a vampire hunt full of potentially lucrative prizes and riches. The team behind this release has gone above and beyond when it comes to the overall appearance of the game.

They have pushed the graphics way past anyone’s expectations. This slot is set in a small, semi-abandoned town that is eerily empty. The train station that dominates the view will make anyone’s skin crawl with its main building in a creepy state of disrepair.

It’s also nighttime and the only things that illuminate your surroundings are two old street lamps and the mysterious greenish fog that permeates the area. Last but not least, it’s worth mentioning the leafless trees swaying in the wind. Combined with eerie music and occasional gawk of a raven, there is tangible suspense in the air.

The base game is also on a whole different level. There are 6 reels, but each reel has a different number of rows to it. This progression follows the 2-3-4-5-6-7 layout that definitely makes the whole game that much more interesting.

There are also several interesting special features. The most basic one is the Multiplier Wilds feature that drops randomly on the reels. There are 4 wilds, each carrying a different multiplier ranging from x1 to x5.

Next up is a bonus spin mode that comes in various levels depending on how many bonus spin symbols you draw. The game also has a mission system that allows players to progress from Bronze, Silver and Gold up to Platinum levels. Oddly enough, the developer has also added a save system that allows for save game creation.

Overall, the game offers a max win of 2500x the original bet and belongs to fairly volatile titles.

Kalamba is a software development studio based partially in Malta and Krakow. This company is focused on delivering high-end slots and other casino content that brings its users a competitive edge in modern highly saturated markets. Despite being founded as recently as 2016, the brand has become one of the more popular companies in the slot game market. Their portfolio currently includes over 16 titles, most of which greatly exceed what the competition offers.

It also takes pride in the fact that they deliver highly engaging base game mechanics, promotional tools and other services B2B clients can use to improve player acquisition and retention.