Jet Off into Another Era with Steam Vault from OneTouch 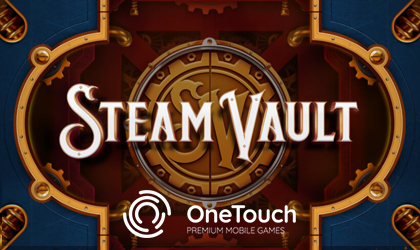 OneTouch, one of the leading mobile-first software providers, has developed a brand-new game titled, Steam Vault. Set in a time when technology was…

…just taking off, it offers an interesting theme paired with great features and core game mechanics. Fans of classic slots will appreciate what this game has to offer.

The studio has done a great job creating a classic slot that features all the attractive components of modern titles in a Vintage package. As its name indicates, the whole game is all about steam. From an aesthetic point of view, it has a solid steampunk vibe to it.

The background is full of all kinds of pipes and ducts while the reels are topped off with a bunch of sprockets. Symbol design follows a similar idea as well. All of the symbols feel very mechanical. With that said, they don’t follow the usual layout seen in most slots these days.

There is only one tier of symbols, which is to be expected considering the type of base game mechanic this slot is based on. Despite being rather simple in design, the game still looks quite engaging in terms of what’s going on the screen.

Classic Reels in a Modern Package:

The base game is all about that classic feel. It features a 3x3 grid that runs on 27 ways to win. Even though it is a classic slot, there are still several interesting bonus features to be explored. The very first one is the bonus spin round that works just like it does in any other slot. Players will have to get 3 scatter symbols which will trigger 10 bonus spins.

The other is the main bonus game called the Bonus Vault. Triggered by collecting appropriate symbols in the middle reel, The Vault activates a ‘wheel of fortune’ type mini-game that can yield impressive rewards.

Players can potentially win up to x2500 the original bet! The Vault feature takes quite some time to load, but once it does, it can be a game-changer.

Ollie Castleman, Head of Marketing for OneTouch, offered a comment on the new release: “Steam Vault is one of the games we’re most proud of. With a unique theme, and slick graphics and gameplay, players will love the experience, especially if they manage to collect enough symbols to enter the Bonus Vault, where they have the chance to walk away with huge prizes.”

OneTouch is one of the leading mobile-first game developers in the industry. The company has been specializing in delivering engaging, premium quality games that are optimized for one-handed use so that everything in-game can be accessed easily.

On top of that, the developer is all about creating a convincing online casino experience that is meant to mimic the feel and vibe of a brick and mortar establishment.