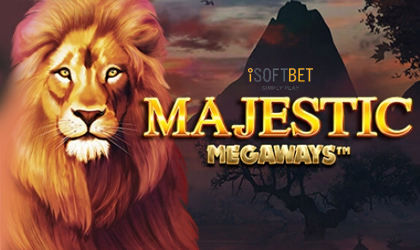 iSoftBet has announced the release of its latest slot game titled Majestic Megaways.

Set in the amazing continent of Africa, the new game is all about…

…the wildlife and that beautiful sundown over a wide-open savanna. Fans of this genre are in for a treat as the supplier went all out on this game!

The King of the Jungle Returns:

The developer’s latest slot is all about bringing the thrills of Africa to the reels in a safe and relaxing way.

…bringing the essence of African wildlife and nature to the reels. The background comes in the form of a blood-red sundown over African plains with a few trees being the only thing breaking the horizon. The background is animated and features moving clouds as well as birds flying near the top of the screen. Symbols are probably the best thing about this game. As one would expect, all of the higher paying icons are related to animals and wildlife. Players will get to see elephants, rhinos, lions and more.

The title runs on a variable grid meaning that each of the 6 available reels can have anywhere from 3 to 7 symbols. In other words, it’s the classic Megaways layout. Additionally, this game uses the cascading reels that greatly improve one's chances for potentially scoring a win. The title brings a number of awesome features but one stands out.

Namely, the provider is rolling out its Bonus Buy option with this game…

…that allows players to purchase bonus spins on demand.

Mark Claxton, Head of Games at iSoftBet, shared his comment regarding the release: “We enjoyed resounding success with our first Megaways title, Aztec Gold Megaways, and are delighted to be adding a second title to the iSoftBet Megaways family. The exhilarating setting transports players to the great African plains and, with an increasing win multiplier always active, the bonus round is one of our most lucrative yet! Add in the option for players to choose the Majestic Bet, with a guaranteed feature trigger, and you have all the elements for a Megaways slot which we fully expect to deliver impressive results.”

iSoftBet is an innovative slot specialist that continues to deliver new and fun games to the iGaming market. The company works with a number of tier-one operators from all over the world and is certified to offer its content in 16 regulated markets. Aside from the content itself, the provider runs its own content aggregation platform called GAP. GAP currently works with over 50 independent providers and is offering one of the largest portfolios out there.