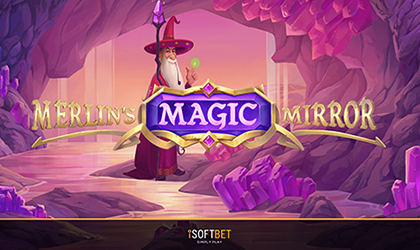 The tale of Merlin, or Myrddin as he is known in Welsh mythology, is the most recognizable and famous enchanter in popular culture. This centuries-old myth has been depicted in one way or another in various books and media. iSoftBet took this story and put it in a slot package. The end result promises to be one of the most magical titles we will see this month.

The idea of Magic has always been attractive to people. Combine that mysterious aura that surrounds magic, with the notion of potentially massive wins and you have an almost guaranteed hit. iSoftBet has a decent track record for designing impressive-looking slot games that simply captivate the player and add to the overall experience. This is definitely one such title.

The theme is set in a mysterious cave where Merlin resides and takes part in his art of magic. The overall aesthetic is easy on the eyes with pastel colors used for the majority of what the player sees when they fire up this slot game.

Looks aside, Merlin’s Magic Mirror seems to be a rather polished out package. It is a 5-reel title with 20 paylines and a relatively volatile base game. Special features are available and come in form of Wizard Wilds, Mystery Magic, and Magic Mirror Respins. Overall, there is plenty to do in Merlin’s cave.

Michael Probert, Chief Commercial Officer for the company, offered his comment on the new game: “We are thrilled to release our latest spell-binding slot, Merlin’s Magic Mirror. With an immersive setting, innovative gameplay, and features that can turn any spin into a win, Merlin’s Magic Mirror is certain to be a hit with our operator partners.”

The title is available on select online casinos partnered with the brand.

The developer is having a very successful year based on their most recent actions. This European studio was one of the first to enter the newly regulated Swiss markets, which is a feat of its own. Furthermore, they have been actively releasing quality titles that can be found on a number of popular online casinos.

The company behind Merlin’s latest adventure is promising to become one of the most respected studios on the European side of the industry – a conclusion that isn’t too farfetched considering the path this company is taking and will take in the near future.

The studio behind the new release is a Romanian-based company that has been proving to be a proper driving force in the slot niche. Their titles are sought after in numerous markets where iSoftBet has a presence, but also in those where they aren’t yet available.

Ran by a small team of highly dedicated individuals, this company is taking on massive projects with and often exceeding expectations. They have shown a great deal of potential for such a small entity, which has earned them a great reputation among their peers as well as their users.

Samurais Are Rising in Latest Online Slot from iSoftBet