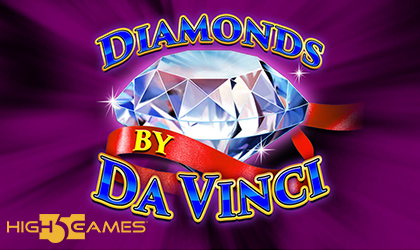 Now, this is something special. One of the most innovative casino game suppliers, High 5 Games, has just unleashed a reel slot that is somewhat an homage to one of the greatest artists of all time – Leonardo Da Vinci.

Furthermore, they wanted to create a game where players can see his most popular paintings, such as the Lady with an Ermine, the Mona Lisa and the Portrait of a Musician. It’s titled Diamonds by Da Vinci and it surely is one heck of a game.

This 5x3, low-to-medium volatility slot comes with a very interesting feature, Tumbling Reels that can uncover winning gems. Furthermore, if users land more than three bonus icons across the reels, they will be able to enter the gallery where a plethora of free games awaits. Besides them, during the bonus round, gamers can look forward to seeing additional casino spins, scatter pays and popular artwork characters.

Ever since they were established, H5G has unveiled many spectacular and entertaining video slots, including its more recent release, Jokers Riches. However, the one that became the hallmark for this company was surely the original release of this game, launched 10 years ago.

According to some reports, players were simply blown away by this title and the good thing about it was the fact that users were able to play it on both desktop and mobile devices. In order to indulge its users, in the meantime, High 5 released two extremely famous titles – Da Vinci Ways and Double Da Vinci Diamonds.

Anthony Singer knows how successful previous versions of Da Vinci-related games were and is also aware of the fact that fans will love this edition too, stating:

“This latest addition to our series of games inspired by the artwork of Leonardo Da Vinci promises to be our most immersive creation to date.

“The classic gameplay is still enjoyed by casino players across the globe today and we’re sure that the Tumbling Reels and bonus rounds featured in Diamonds by Da Vinci will appeal to a wider audience and become a huge hit for operators.”

For those of you who are impatiently waiting to launch this reel slot we will inform you that this game can be found on H5G’s rapidly-growing network of operator partners via their outstanding remote game server, High 5 VAULT. All in all, we are looking forward to playing more video slots from this popular developer.