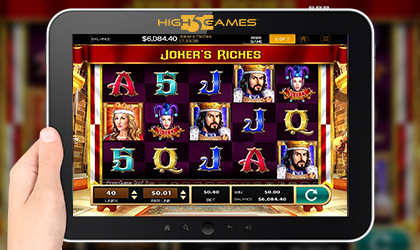 One of the biggest independent casino games suppliers has created the perfect combination of something luxurious, while at the same time, entertaining and silly.

Namely, they have launched a video slot titled, Joker’s Riches, which has become one of their most popular slot machines in the regulated market of Sweden.

What Is Going On In Here?

When we said that the game is silly, we are referring to the fact that everyone who decides to play this reel slot gets to be a joker. As you can assume, the entire story is placed in the kingdom’s courtyard and your goal as a jester is to entertain both queen and king (who can be seen on the reels) by performing amusing acts.

Across the reels, games will occasionally notice wild jokers whose main goal is to convert other similar jesters into wilds.

Ultimately, if three of them are seen across the reels during gameplay, gamers will have many opportunities to trigger other wilds and further upgrade their gaming experience.

Where Is The Jackpot?

The provider founded in 1995, High 5 Games, would never be able to release a slot without adding something as thrilling as an impressive jackpot.

It can be found during the bonus round, inside of the jackpot treasure chest that contains a plethora of valuable prizes that are going to fill everyone’s pocket.

Besides this important segment of the game, it’s worth mentioning that this HTML5 5x3 slot comes with medium volatility and is equipped with top-quality graphics and hypnotizing sound effects that amazingly enhance the entire atmosphere.

Moreover, this video slot can be played on mobile devices, tablets and desktop, too. All in all, this title is accessible to H5G’s network of operator partners via their outstanding game server, titled High 5 VAULT.

“Joker’s Riches sees players grab the jester’s hat as they look to successfully entertain the king and queen in their quest to win big prizes.

While players may be fooling around for the amusement of the royals, there’s no joking with the gameplay, which features wilds and free games to make for a fun gaming experience.

Since launching, Joker’s Riches has already become one of our top-performing games in the UK and Sweden, and we’re sure it will prove to be a bigger hit as we roll out our latest slot across our operator network.”