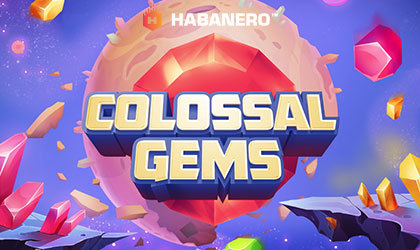 Habanero Systems, a notable software development studio in the iGaming industry, has broken the news of a new game. Titled Colossal Gems, this latest release…

…represents this company’s 100th slot title. With such a landmark launch, Habanero is showcasing the best they have to offer in terms of…

Habanero has been operating in the iGaming industry as one of the most unique software providers. Their games are said to bring new angles for players to enjoy, as well as interesting features the market isn’t used to.

Colossal Gems is the 100th slot title, but this company has 120 games in total in its portfolio. These include table games, slots, video poker and more.

When it becomes fully available, the title will provide a balanced experience packed with great features. The developer hints at…

…cascading re-spins with massive symbol clusters and more. As the name indicates, the real prize is the colossal win. Described as a fairly volatile slot, it promises to be a great palette cleanser following up Nuwa – their previously released title that is much tamer in comparison.

The game is said to put players in a mysterious environment where they will be surrounded by all kinds of gems. The theme, although apparently rather simple, is said to be capable of great player retention with its contrasting colors and an environment that hints at a possibility of a large win.

Habanero is a popular software supplier that operates in the iGaming industry and services online casino operators from all over the world. From its inception, this company has been dedicated to creating games that will challenge the player but ultimately deliver the best gaming experience.

Although player-oriented, it is also dedicated to delivering various content management solutions for its B2B clients. With its software, operators are able to exert full control over their content, what the end user sees and how it is presented. On top of that, this studio’s APIs deliver nearly seamless integration into whatever platform or infrastructure the client is using.

Despite being one of the smaller companies on the market, it has proven to be more than capable of handling all challenges in its way.

The team driving this company forward has decades of experience among themselves, which has allowed them to anticipate how the industry moves on time. Such dedication to both their B2B clients and their players has grown this company quite a following over the years. The brand is currently working with a number of top-tier operators that are working in various regulated markets around the world.

Over time, the team has released some of the most critically acclaimed slots. The company currently has locations in Johannesburg, Sofia, and Kyiv. The multinational nature of their business has reflected on their product as well. Its games come in various languages as well as currencies.