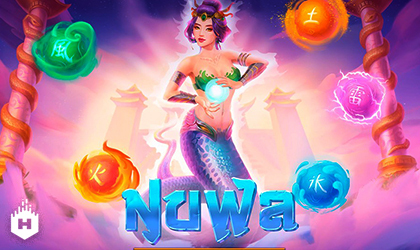 Habanero has announced the release of a brand-new slot game, titled Nuwa. This ancient Chinese-themed adventure takes players into a…

…magical world of Chinese mythology and brings a number of awesome features to the table. The game brings a vivid theme and captivates with its strong visuals.

Nuwa is one of the highest deities in ancient Chinese mythology. Even though exotic tales from the Far East are nothing new in the world of slots...

… to say the least, what Habanero did is refreshing. The studio known for its unique approach to aesthetics has outdone themselves again with the graphics in this game.

The studio behind this title has delivered a fully animated background as well as a unique symbol design. All of this makes the aesthetics of the game incredibly compelling. The developer’s artists went for the ultimate immersion with vivid colors and lively characters.

The base game is arguably this slot’s strong suit. At its core, this is a 5x3 slot that uses 28 fixed paylines. It also offers a number of interesting…

… features that up the ante!

More on the Features:

The available features come in the form of an extra spin mini-game where players are awarded up to 8 spins when 3 or more scatter symbols appear on the reels.

This is where players can collect five, differently-colored symbols and unlock the Bonus Round. This round gives 5 additional spins and triggers a wild symbol to appear twice per spin. On top of that, all prizes are doubled! As expected, the Bonus Round can’t be retriggered while it is still running.

Toni Karapetrov, Head of Corporate Communications at Habanero, gave the following statement: “Nuwa is synonymous with Chinese Mythology and our latest release is sure to prove popular in a range of markets. As with all Habanero releases, Nuwa features the latest in high-end graphics and sounds and with a double-layered bonus round, we are giving players even more chances to win big.”

The game is available at all affiliated online casinos.

Habanero Systems is a company that is producing top-tier slot games for the B2B market as well as other solutions. Their APIs are delivering borderline instant integration of their portfolio on the client’s existing infrastructure. On top of that, this company has been working on advanced backend tools which they named, the BackOffice.

This software suite offers versatile game configuration, player management, jackpot management and much more. It represents a complete framework for content management that allows operators and online casinos to have absolute control over their player’s gaming experience. In addition to all that, the brand has been working hard on ensuring that their content is presented equally on both desktop and mobile platforms.

With games and RNG certification in 16 different regulated markets, this company’s portfolio of partners is extensive to say the least. Even so, they are constantly working on adding new companies to the fold.