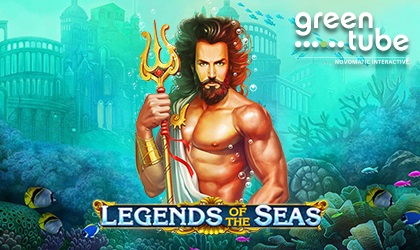 Roman mythology has always been a huge source of inspiration to many game developers. They are filled with interesting and intriguing stories that will only spark your imagination. This time, Novomatic-owned supplier, Greentube, developed a game that will not only enthuse you with its wonderful design and appearance but also with superb features.

King Of The Sea:

We all know that fearless Neptune was the big ruler of the seas. He was the king of storms and tide, therefore, he deserves to have his own game in the form of video slot called, Legends Of The Seas.

As we previously mentioned, one of the things that will surely catch your attention is the visual aspect of this slot machine. With its miraculous and vivid colors, it will take your breath away.

What Does It Have To Offer?

Besides mesmerizing symbols that can be found on the reels, you will also encounter bonus spins with a wild reel, along with the Neptune feature. The characters have the ability to spread in order to cover up to nine neighboring positions. With all these features, you will never be bored!

This five-reel slot machine is equipped with forty win lines, a gamble feature and powerful bonus signs like the scatter (mermaid, neptune, and mermaid & neptune scatter).

Surprising Things You Can Get:

During classic rounds, a random character can be chosen in order to cover anywhere from four to nine adjacent fields.

Casino Spins – scatter symbols can trigger them, but how? For instance, the neptune scatter can only be seen on reel two, while the mermaid scatter can be found on reel four. In case both of them are spotted at the same time, you will instantly activate ten bonus spins!

Furthermore, a multiplier (that can multiply your amount up to ten times) could potentially be added to the amount you already won. During this bonus round, one out of three features is chosen randomly in order to launch each spin.