Greentube Goes Live with the Spirits of the Valkyrie Slot Game 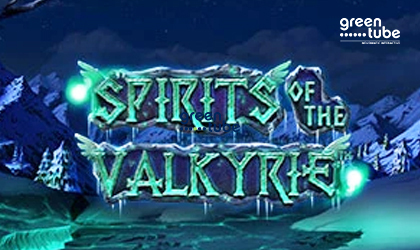 Greentube has released a chilling slot game that brings the player to a magical adventure. Titled Spirits of the Valkyrie, the new title…

The Tale of Ice and Magic:

Spirits of the Valkyrie brings a compelling theme that puts the player in an icy, Nordic forest at the dead of the night. The only other person there is…

…a Valkyrie – a creature from Norse mythology, the ‘chooser of the slain’ tasked with taking the fallen warriors to Valhalla.

The whole aesthetic is rooted in colors one might find up north when Aurora Borealis appears in the night sky. With a properly magical atmosphere…

…the game has an uncanny ability to draw the player in. Once there, the base game mechanics kick in. The game is based on a well familiar layout that isn’t introducing anything out of the ordinary. Greentube’s ability to create such an attractive package based on a standard base game is worthy of praise. The creator of Jinxy Match 3 has chosen to stand out using special features.

The game runs on a 5x3 grid and utilizes 20 paylines. In terms of volatility, the studio behind the title claims a medium value leaning towards volatile.

As far as special features go, there are many to choose from. The game features Winged Gem, Win Stack as well as an extra spin mode. Aside from scatter activated bonus features, there are also a few randomly activated ones.

At any moment during gameplay, players might experience Colossal Magic – a random event where a massive symbol falls on the reels and covers up to three reels.

The diversity of features is only enhanced by custom animations that follow each one. The Valkyrie that stands on the right side of the screen is plenty enough to keep the player entertained but also intrigued by her movement and reactions. Aside from the graphical solutions and animations, the game boasts impressive audio. The soundtrack works well to tie everything together and make the game shine.

The game will be available in all the brand’s affiliated online casinos.

The developer serves as one of the oldest software providers in the iGaming industry. Founded in 1998, it has been on the forefront of gaming content. Their first debut title came in the form of a 3D Ski Challenge game which took the industry by surprise. Its ability to recognize emerging trends and stay at the forefront of technology has allowed them to…

… gain a loyal portfolio of B2B partners. In 2010, they became a part of the NOVOMATIC Group. With the newly found access to extended resources, the company was ready to show its full potential.

Today they are one of the leading providers on the market, offering high-quality games in all aspects of iGaming industry. Even so…

… this team is always looking for a challenge and a way to expand into newly regulated markets.