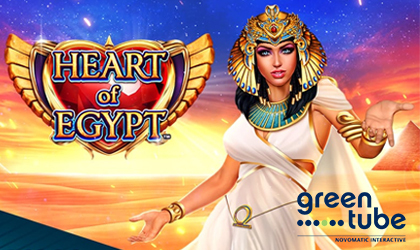 Greentube’s latest slot game takes players on an adventure deep in the Heart of Egypt. There, they will navigate the vast desert in search of potentially high winnings.

This dangerous journey is riddled with awesome special features and much more.

In Search of the Pyramids:

Greentube, an interactive division of Novomatic, has offered its own take on the ancient Egyptian theme with this fresh release. The game features a fresh theme that puts players under the star-spangled sky, right in the middle of a desert. The only thing breaking the monotony of a desolate horizon are the shapes of pyramids…

…out there in the distance. The studio behind this slot has put together a theme that is full of glaring elements that give the whole game a very unique look.

The game also has a whole different setting where players are taken to an open-roof temple during the night. The addition of the secondary scenery counters the initial setting and gives the game some contrast. Greentube has used the standard card royals set for their lower paying symbols. The higher paying deck comes in the form of various artifacts and iconography associated with ancient Egypt.

Players will see the Eye of Ra, a golden Ankh – the ancient Egyptian symbol for life, chests full of treasure and more.

The game runs on a 5x3 grid that utilizes the 243 ways to win mechanic. Greentube announced this ahead of time since Heart of Egypt is a part of their ALLPAY series but doesn’t feature win lines like the rest of the games in the series.

The team behind this release has included a number of extra features that make this game even more attractive than it already is.

The most unique feature is the Extra Bet option that allows players to increase their total bet amount and potentially improve their chances for a large win. Additionally, there is the Bonus Game mode that yields anywhere from 5 to 25 bonus rounds while each bonus round can carry anywhere from 2x to 30x multiplier.

On top of that, if players activate the Bonus Game mode while the Extra Bet is active, they will gain another 5 extra Bonus rounds.

Novomatic Group is one of the oldest and largest producers, operators and suppliers of gaming technologies in the industry. The company was founded back in 1980 by Johann F. Graf and has since grown to become a massive entity that has a presence in over 50 countries of the world where they employ approximately 30,000 staff. It also has a number of 3rd party software providers under their wing, who supply them with exclusive titles.

Always on the edge of innovation, the brand is one of the driving factors in the iGaming industry with its Distributed Gaming Solutions as well as high-end gaming content.