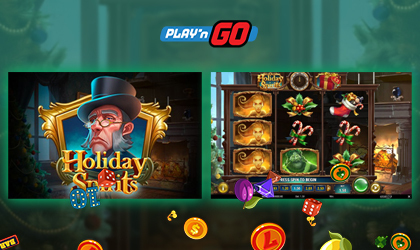 Christmas is coming and Charles Dicken's classic novel, A Christmas Carol, inspires another provider to create a slot established on the story of Ebenezer Scrooge. Play'n GO Holiday Sprits just in time for the winter holidays, bringing a positive atmosphere and a lot of fun. Looks like the provider has meticulously taken care of the preparations for Christmas.

The slot is based on 3 reels and 3 rows with 5 active paylines, where in the background there is a lighted bedroom with a lit fireplace and a beautiful Christmas tree. It has a warm atmosphere that perfectly captures the atmosphere of Christmas, which puts players in the right mood when they launch the game. The title is a medium-volatility game so it doesn't take too much effort to generate wins, while the RTP stands at 94.22%, which is below the average these days.

This video slot can be played on any device and players enter by placing bets between $0.1 and $100 per spin. The maximum potential win stands at $160,000 in a single spin playing with the maximum bet available. As a result, the maximum potential of the game is below average at 1600x the bet from the provider, which can be explained by the volatility and generous payback percentage.

Enriching the Game with Small Details:

Martin Zettergren, Chief Product Officer of the slot supplier, spoke about the importance of paying attention when creating titles:

“It’s essential to pay attention to the little details when creating a game, the small touches and ideas that enrich the game. This becomes even more important when basing a game on something players know and love. Be it mythology, famous characters, or a much-loved band you have to get the important elements in there, as well as adding your own touches.”

The finest online casino game developer earned itsname not because it is recognized by achievement, but because they are pushing the boundaries of game design. That is exactly what the developer is doing, proving itself one of the greatest and in delivering designs for online casino games.

The brand was launched in the 90s by Swedish developers. It was operated as an associate of other major software companies until 2005 but has since been operating as an autonomous company. It has offices in Sweden, and is operating under several licenses such as Malta, Gibraltar, the United Kingdom, Alderney, Denmark and Belgium. They currently have over 100 games and more than 300 jackpots in their portfolio in over 30 different languages.