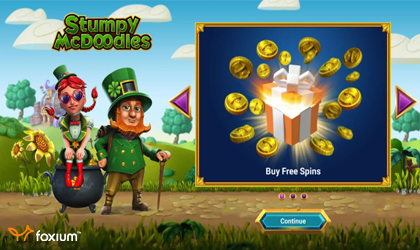 Putting its own mark on Irish folklore, the developer has packed the game with many interesting and exciting features.

Irish folklore has been a popular subject for iGaming products recently and the company is hoping to get a slice of that market pie.

Together with his trusty partner Penny, Stumpy will jump across the reels in this feature-filled video slot tribute to all things Irish. In typical fashion for this game studio, there is an interesting story that punters will discover as they play as well as a high degree of gamification.

“At Foxium we believe in making every concept and every story our own, which is why Stumpy McDoodles stands out from the crowd of other Irish-themed games..."

..."As well as being another opportunity to deploy our game-changing FoxifyTM feature, Stumpy McDoodles is also the latest showcase for the strong creative design, characterisation, and gameplay that make Foxium’s slots so sought-after by players in a range of different markets.”

“Packed with features and fuelled by a thigh-slapping soundtrack, Stumpy McDoodles is the party that never has to end.”

As we mentioned before, the game is absolutely filled to the brim with features meant to make the punters’ experience more enjoyable.

One of these is the Stumpy Random Wilds, where a pot of gold appears in front of the reels and then explodes, showering the player in bonuses. These bonuses are random multipliers in the 2x to 5x range and three to eight wilds on random positions on the reels.

…they represent a serious win potential.

Going further, players will also be greeted with an extra spin round which is triggered by scatter symbols.

Stumpy is busy during this mode too, as his magic pot can award punters with multipliers and extra wilds. And when enough wilds appear the pot can randomly merge them into one king-sized super wild.

If the players narrowly miss the extra spin round, there will be a respin to give them another chance.

…such as buying extra spins outright for 50x the bet, or activating the Foxify feature which doubles the multiplier values in both the base game and the extra spins mode.

These features are similar to the company’s previous effort – The Great Albini which they produced in collaboration with igaming powerhouse Microgaming.

Foxium was established in 2015 in Estonia and has since become one of the premier slot developers in the igaming industry.

Best known for combining intricate storytelling with a high level of gamification, they also produce slots that have flexible RTPs in order to accommodate different operators and markets.

This news offering is coming soon to all online casinos who carry games from this provider.