Microgaming and Foxium Prepare Mystic Journey with The Great Albini 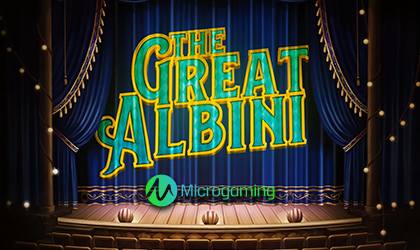 If mysterious and bewitching locations are your thing, then you’ve come to the right place. Microgaming just unveiled a video slot called, The Great Albini, which will immediately cast a spell on you.

Features That Are Not Illusions:

This game is going to take you on an intriguing journey that holds many mystical bonuses and symbols.

A slot machine that was developed by Foxium will represent you with widely-popular illusionist and his breathtaking assistant, Lily.

With their performance and show, everyone who plays this slot will start believing in magic again!

This reel slot brings along five reels and twenty-five pay lines. Furthermore, along with them, you will get to experience various sensational features like wild reels, casino spins, wilds and Mystery Box respins.

Although it may seem like a less relevant element, we have to praise the design of this reel slot. It looks mesmerizing!

It exudes with vintage beauty and will make you feel like you are literally witnessing one of the most spectacular shows in the world.

Vivid colors, radiant characters that include target board, high cards, a canary, a thimble and the magician himself will additionally enhance the entire atmosphere.

Besides the visual aspect of this game, we must commend a nicely-done music that goes in the background that perfectly complements everything.

One of the best parts of this game is a feature called Mystery Box Respin which can be activated when three or more mystery box icons are seen on the middle reel in the 5x3 grid base game.

During it, you can receive three additional respins that are going to help you lock another mystery box.

Each time succeeding mystery box icon appears the number of respins will reset to three giving you the opportunity to potentially earn spectacular prizes!

Once you’re left without respins or you fill up the entire reel-set with these boxes, you will instantly end this feature.

Our main character will then uncover one sign that will be inside of each of these boxes.

There are more appealing features on the horizon. Namely, if 3x3 extra spins characters are seen across the reels 2,3 and 4 you will experience an amazing transformation of the stage, turning the grid to a 5x6 format and enlarging the number of pay lines to 50.

Then Lily will show up and she will reward you with 12 bonus spins! During this feature, this illusionist could potentially cause Lily to suddenly disappear.

If that occurs, you will stumble upon a 1x6 vertical Lily Wild symbol on one of the three center reels.

Moreover, this phenomenal wild reel comes with 2x multiplier on all winnings! The good news is that this additional round with Lily can be retriggered within casino spins.

Yes, there’s more! This one can be played during the base game enabling the users to buy 8, 10 or 12 bonus spins with the Lily feature whenever they want!