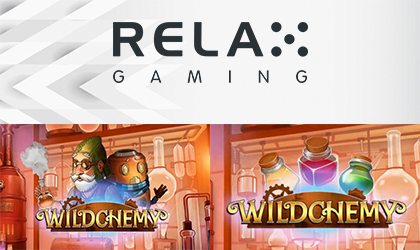 Relax Gaming, a software developer with a long history of creating highly engaging titles, has released another such game called, Wildchemy. The new game brings…

…an interesting theme to the table as well a number of potentially lucrative features that make this entire slot experience truly incredible!

The brand’s latest addition to their portfolio comes in the form of a proper magical adventure. Players who are fans of steampunk, early industrial age themes will absolutely love…

…what this game has to offer. The graphics are immersive, bringing players into a whole new world of magical potions and alchemy. As the game starts, players are taken into a massive laboratory belonging to someone who is very serious about exploring the power of Magic.

The background is very detailed, featuring all kinds of lab equipment, glass containers, vats and vials. The liquids and potions in these give a colorful contrast to what is essentially a dreary looking early industrial setting.

Fortunately for everyone, things only get more colorful as the reels start to spin. Symbol design in this slot is all about the visuals with different kinds of potions used to denominate various winning amounts.

A Recipe for Success:

Underneath the mysterious aesthetics hides a very straightforward game. It features a 5x5 grid that runs on a payline system where every 3 or more adjacent symbols…

…of the same kind result in a winning spin. As far as special features go, there are several. First, there’s the Magical Portals feature that lands several portals on the reels. Whatever symbol falls into the portal will instantly turn into a wild.

Next up is the Exploding Scatter symbol that will explode and create cascades when drawn on the reels. Lastly, there is the Bonus Spin mode that yields 4+ additional spins for every scatter that gets drawn during this special feature.

Simon Hammon, Relax Gaming CPO, offered a comment regarding the new release: “Wildchemy is a prime example of Relax Gaming’s distinctive visuals and action-packed gameplay that puts players right at the heart of the game. The result is an immersive experience that appeals to a wide audience ranging from experienced slot fans to casual players.”

Relax is a software company founded in 2010 with headquarters in Malta. The idea behind the brand was to create a vessel that would allow a talented team of creators to infuse the iGaming industry with new, game-changing content. It has since become one of the leading brands in the industry, offering a great portfolio of games to players in various key markets.

The company has also established its own content aggregation platform called Silver Bullet, and is slowly building their own network of third-party providers who meet and often exceed the standards set by the team at Relax