Find the Mysterious Treasure in Drago Jewels of Fortune by Pragmatic 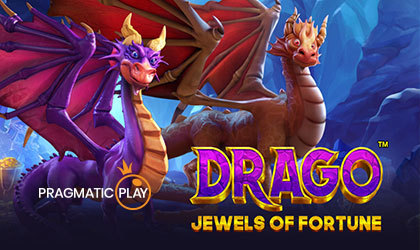 Pragmatic Play is treating its players with a brand-new slot game adventure that takes them deep underground for a thrilling ride!

The game offers impressive visuals that are only the tip of the iceberg when it comes to what the developer has in store for us. The

The supplier has announced the release of its latest title. This latest addition to their massive portfolio comes in the form of an epic adventure that takes players deep underground in search for potentially lucrative prizes.

The visuals this game brings to the table are impressive, to say the least. Once this slot loads, players will find themselves in a massive cave system that is just filled with treasures.

…atmosphere of the cave is contrasted by the glimmering Jewels collected by our entrepreneur dragon. The reels are where some of that glimmering contrast is coming from as well.

However, it isn’t the jewels that are glowing on the reels. The game studio went with the card royals for the lower-paying tier while the higher-paying tier consists of various dragons.

…ones it does bring to the table are more than sufficient. As far as these go, the first one that comes to mind is the Dragon Super Spin. Triggered when four matching dragon symbols are drawn in the four corner positions of the reels, Dragon Super Spin brings various potentially lucrative prizes. Players can look forward to multipliers that go up to 5000x the original bet if lucky!

Aside from this feature, there is also the Bonus Spin mode with its several features and 3 initial bonus spins.

Melissa Summerfield, Chief Commercial Officer for the provider, commented on the new release: “Drago – Jewels of Fortune is a fantastic, thrilling addition to our portfolio. With a carefully crafted setting, fearsome foes, and huge sums to be won in the lair of the Dragon, it looks set to be another great hit in the Pragmatic Play slot offering.”

Pragmatic is one of the leading software providers in the iGaming industry. The company has been specializing in high-quality slots for a long time, offering players worldwide an entertaining experience. Known for high-quality releases and innovative features, it quickly became one of the leading brands in the industry. So far, they’ve built a considerable reputation as well as a massive distribution network.