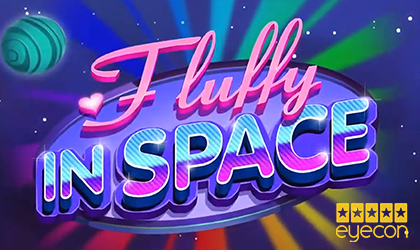 We all have that inner child that sometimes rises to the surface whenever we come across something cute and childlike. This time, Eyecon has designed a game that will remind you of those old cartoons that we all love when we were little.

Let’s Fly Among The Stars:

The brand-new slot machine is called, Fluffy in Space, and it showcases bunch of cheerful animals that are occupying the reels.

All of them are getting ready for an unbelievable adventure that is filled with interesting moments and features. It brings together all those characters we fell in love with before.

Who Can We See?

As we stated earlier, there is a plethora of different animals in this game, such as a turtle, lion, duck, panda and hippo.

Although each of them seems very kind and sweet, make sure to focus on the gameplay in order to collect some valuable prizes.

Keep your eyes on the scatter characters (the planet and pink elephant), as well as the wild icon. The more elephants you grab, the better. Furthermore, at least three of them will activate the ‘Fluffy in Space' re-spin feature and will enhance your chances of getting great prizes.

Besides it, planet signs are also very important. If more than three are seen across the reels, you will launch up to twenty-five casino spins!

As always, the wild symbol (which comes in the form of a logo icon) can serve as a replacement for any other icon. The only exception is the pink elephant as well as the planet.

Those who are not into this type of game, can take a look at one of their latest releases called, Legend of the Five Ninjas, that is also super dynamic but comes with a slightly different story and graphics.

What Do We Know About Them?

A desire to make innovative and creative things inspired a group of people to establish this software brand twenty-two years ago.

At first, they were founded as a typical computer company. Gore was their most popular game, having millions of downloads.

Two years later, they started making their own online casino system and gambling games. Sixteen years ago, they designed their first slot machine called, Temple of Isis, which is still one of the most wanted games in the industry.

Still, the game that caught the attention of everyone was surely, Fluffy Favorites, back in 2006. It is definitely their biggest achievements when it comes to video slots and one of the best games in general.