Eyecon Releases Legends of Five Ninjas Only for Fearless Players 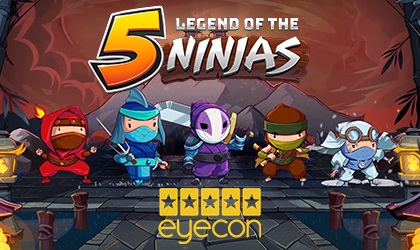 Promising gaming company Eyecon just recently unveiled a reel slot called Legend of the Five Ninjas. For those of you who didn’t know, it represents a sequel to Five Ninjas and according to many, it is as equally good as the first part.

What Happens in This One?

This game is the first one to be developed in their new HTML5 framework. In this version, the highly-anticipated Ninja returns to try to once again grab some delicious rewards. This is a 243 ways slot machine.

Besides him, you will meet the rest of his dynamic crew. Meet the warriors Fu, Ka, Sui, Ku and Chi. They will reveal all secrets that this game has been keeping and they will combine their powers in order to make the omnipotent zen ninja called Godai!

Keep an Eye on Godai:

We would like to point out the importance of having him by your side by saying that he is one of the most important characters in this slot, especially during the bonus game where you will constantly feel the thrill and excitement while you are on your way to pick some prizes.

All in all, if you are the type of player who is looking for an action-packed, adventurous and dynamic game where you will get plethora of opportunities for winnings, then try out this one.

When you are one of the most promising companies in the gaming world, then it’s logical you want to be recognized wherever you set foot. After “claiming” the UK gaming market, the founder of this corporation, Scott Murray wanted to go further into Europe.

The first stop was the Maltese market and he said that his goal is to repeat the same success his company achieved in the United Kingdom. Besides that, he wants to gain the trust of potential customers, meaning attract new players by providing them with high-quality games.

We want to reproduce that excellent relationship here in Malta, as that rapport gives us the ability to tackle problems together and ultimately provide the best product to our clients.”