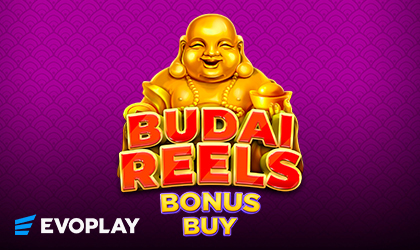 In Budai Reels players are welcomed by a cheerful monk named Budai who is ready to help punters to generate decent payouts. Presenting an exciting opportunity, players will have the chance to win progressive prizes and this online slot by Evoplay Entertainment is sure to provide an enjoyable experience for all who play it!

Budai Reels Bonus Buy offers 5 reels, 3 rows, and 20 active paylines. Expect more frequent payouts as the math model looks great, the volatility is low to medium, and the RTP is 96.13%. The maximum potential win is 5,000x the bet and players will have several bonus features including wilds, scatters, spin symbol, re-spin feature, and extra spins. As for the betting range, the minimum betting option is $0.1, while the maximum is $75.

Budai Reels Bonus Buy is powered by the suppliers top-of-the-line game engine, Spinential. This sophisticated piece of software produces faster loading times and also includes an enhanced user interface with an autospin feature as well as history for players to keep track on their successes while playing!

Evoplay has been in the online casino industry since 2003. It has been in the industry for almost two decades, however, it recently reached a higher level of presence in the online gambling market by expanding its partnership network and growing its product portfolio. The company operates under gaming licenses from Curacao and Malta. Its most famous games are The Great Wall Treasure, Tomb of the Emperor, Epic Gladiators, Battle of Pirates, Totem Island, and others. The supplier became a global developer-focused not only on developing slots, but on launching other casino games such as roulette, dice, scratch cards, and more. The brand works from offices in Malta, Germany, and Ukraine.