Enter the World of Medieval Magic in Arthurs Fortune by Yggdrasil 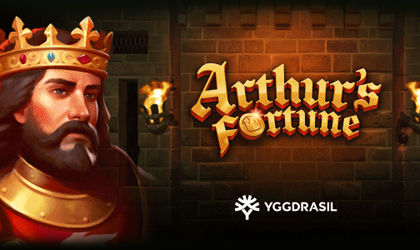 Yggdrasil, one of the largest and most popular software providers in the Nordic region, has announced the release of a brand-new adventure slot that takes players deep within the legend of King Arthur.

Explore the tombs of Arthur’s castle and potentially find his massive fortunes!

There isn’t a corner of this world where Arthur’s legend isn’t known. Everyone has heard about him, his Knights of the Round Table, and of course, Merlin – a powerful wizard whose powers were unmatched. This developer is the latest in line of software providers who have decided to give this story a unique twist.

As Arthur’s Fortune loads, players are presented with an unmistakably medieval scene. The theme is focused around the castle in the distance while the foreground features camp full of tents. As players navigate different features of the game, the scenery will also change!

It isn’t long before you find yourself inside the castle where all the Magic happens! The game’s symbol design features card royals in the lower-paying tier, while the higher paying set represents several different characters. You’ll see King Arthur, various knights and more!

This take on everyone’s favorite legend features a 5x3 reel grid that runs on 20 paylines. One of the interesting features that sets this title aside from most other slots is the fact that any symbol can be randomly converted into a wild. This includes the lower-paying symbols as well. Players might experience this during the base game as well as the bonus spin mode.

Speaking of special features, there are several! There’s Arthur’s Gold feature that will convert up to 10 symbols into wilds during base game spins. Next up is the Bonus Spin mode that can yield up to 14 spins and be retriggered by drawing two more scatters.

Lastly, there is Merlin’s Bonus…

Yggdrasil is one of the most popular software providers in the iGaming industry. Specialized in delivering high end, immersive slot games to fans all over the world, this company offers a massive portfolio of top tier titles. The overall quality offered by the brand has made them one of the favorite partners to work within the industry. Its games can be found in almost any regulated markets and in just about every top tier casino out there.

Aside from their own content, it also runs a partnership program where various 3rd party studios build and publish games through its network.