Enter the World of Ancient Greece and Win Big with Achilles 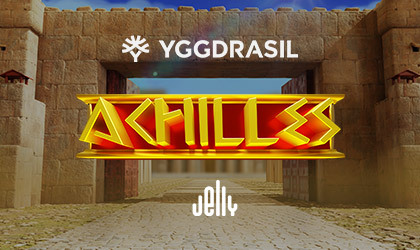 Jelly Studio and Yggdrasil have teamed up to create an epic casino slot that tells the story of one of the most famous warriors of all time – Achilles. This ancient Greek hero was renowned for his bravery and skill on the battlefield and led the Greeks to victory against Ancient Troy. Now you can relive those exciting historical moments by playing Achilles and this game takes you back to ancient Greece, where you'll meet Achilles himself and other characters from the famous story. You'll also get to enjoy some of the most amazing graphics and animations that our team has ever created.

This exciting game comes with 5 reels, 3 rows, and 20 active paylines, along with several bonus features that could help you win big. It has an RTP of 94.99%. This slot promises a maximum win of 5248x the bet while players can bet between $0.2 and $80. The list of bonus features includes wilds, extra spins, scatters, bonus rounds, bonus buy feature, and special symbols.

Spin the Reels of this Mythological Masterpiece:

Achilles is a well-polished game that players will love. Developers put a lot of care and thought into its development, and it’s evident in the final product. If you want to spin some reels with a lucrative mythological theme, then look no further than this game!

Head of Product & Programs at Yggdrasil, Stuart McCarthy, said: “Achilles is a truly fantastic humour-filled game that embodies everything we look for in a YG Masters release. If there’s one game players should look out for this month, it’s this one.”

Victoria Newbolt, Marketing Lead at Jelly, added: “It’s evident that a lot of love went into developing Achilles, and we genuinely believe players will enjoy spinning the reels of the lucrative mythological-themed slot just as much as we enjoyed making it!”

Yggdrasil is well-known in the online casino industry and became a popular choice for many players thanks to implementation of innovative games and technology. The name and logo of the company are inspired by Old Norse mythology, and its titles are all epic and very interesting. It was founded in 2013, and while it wasn’t the industry's top choice at first, it achieved a lot in just a few years. In 2014, it created the iSense platform, which allows the complete customization of new versions of games on mobile and desktop devices. Its dedication to innovation has made them one of the most exciting providers in the industry, and we can't wait to see what they come up with next.