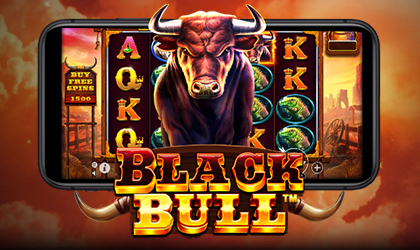 Embark on an adventure through the Rocky Mountains in Pragmatic Play's latest release, Black Bull. With stunning visuals and an exciting wildlife theme, this title is sure to entertain players of all experience levels. Featuring 20 paylines and a range of coin-filled reels, the game is home to some impressive rewards. So, join the hunt for big wins today!

Black Bull has the highest RTP of 96.51% and high volatility, meaning that you have the chance to win big! However, players should be aware that this RTP ranges and some providers can reduce this number. The maximum potential win is 4,500x the bet while punters can bet between $0.2 and $100. The title also features 20 active paylines and bonus features such as Wilds, Bonus Spins, and a Bonus Buy Feature!

After recently launched titles such as Greedy Wolf, Gorilla Mayhem and other slots, Black Bull is another excellent example of a game based on the North American animal motif from Pragmatic Play!

Chief Business Development Officer at Pragmatic Play, Yossi Barzely said: “Black Bull builds upon the money collect mechanic seen in some of our current titles. However, this has now been augmented to allow the collection of these prizes within the base game and also has a way of increasing the value of collected prizes during the bonus round. This feature has proven popular with every iteration we have made of it and expanding the scope of this further ensures that Black Bull will be loved by slot enthusiasts throughout its initial release and into the future.”

Founded in 2015, Pragmatic Play is an experienced game provider that operates from its main offices in Malta. The company offers a wide range of slots for every taste and budget, with different themes and designs. Some slots are bright and energetic, others mysterious and dark, but they all have great features and bonuses. Two new games are added to the supplier's lobby every month, ensuring that there is something for everyone. The company is regulated by the Malta Gambling Authority and the United Kingdom Gambling Commission.

Enter The World Of Sabers and Monsters