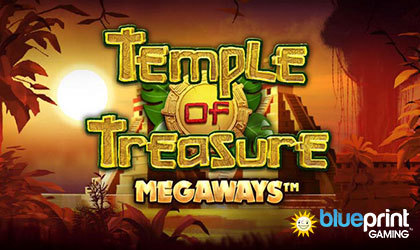 Finding fortune is not an easy task. It takes a lot of effort and time to reveal it. If you are ready to embark on that journey and uncover hidden prizes, then Blueprint Gaming might just have something special for you. We talk about their latest slot machine where excitement never ends.

As we mentioned in the beginning, the main goal of any player in this game is to dig up some hidden treasure that is hidden deep in the jungle.

This game is called, Temple of Treasure Megaways, and it is a fast-moving adventure filled with thrilling moments.

The creators were inspired by the Aztec culture and they also added the Megaways mechanic under license from Big Time Gaming which further improves game play experience by giving up to 117,649 ways to win!

Enter The Temple Casino Spins Round:

This has got to be the most hectic part of the game. Players who activate it will get an opportunity to determine their slot spins volatility and guarantee and choose the amount of Megaways for each spin. Apart from it, they will also come across a mystery choice, which can reward any combination of additional spins and minimum Megaways.

Moreover, if you see this icon, all the reels will turn into identical characters creating increased wins, as well as increased multipliers during the casino spins round.

Also, the game consists of an operator-selectable Temple Bonus Bet feature which gives the users direct access into the slot spins round.

Jo Purvis, Director of Marketing and Relationships at Blueprint said:

“Untold riches are on offer in our latest release Temple of Treasure MegawaysTM, should players find their way through the jungle.

The Aztec-themed slot is one of our most visually striking to date and with the MegawaysTMfeature offering up to 117,649 ways to win, players will become champion tomb raiders as they hunt down the treasure which lies hidden within the temple.”

There aren’t too many things to say about them, let’s just go straight to the basics. They are one of the biggest game studios from the United Kingdom and they are also members of Germany’s Gauselmann Group.

Their line of work covers slot machines for the Global online and mobile markets and their games can be played on more than 100,000 land-based gaming terminals all over the UK, Italy and Germany.