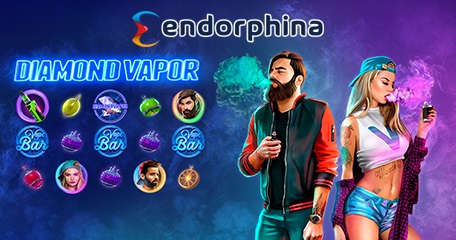 It’s official: the moment players have been waiting for has arrived! Endoprhina has announced that its free play Diamond Vapor slot is now available for real money play. In fact, the brand went live with this version of the game on March 23rd.

The title was originally showcased at the ICE Totally Gaming Expo, which took place this past February, as the world’s very first vaping-themed slot offering. It launched in conjunction with an online vape shop, and was available for free play at www.vapeslot.com. Rather than real cash, players had the opportunity to win a variety of e-liquid flavors and other prizes from Endorphina. With prizes won only available for physical pickup in London, many players were left wondering, what’s the point? However, the provider quickly responded to those losing interest, ultimately launching a version of the game in which real cash prizes are up for grabs. It is further equipped with the opportunity to initiate a series of 10 free spins when you land the minimum number of scatters on the reels.

In an interview with online vape shop owner, Keith, he explained his hand in the creation of the slot: “I have a good friend out of the Ukraine that works with Endorphina already, and he thought it would be a great idea to release a vape slot machine.”

He further discussed his initial interest in vaping: “I started vaping over 5 years ago, when it got real big in the USA, my best selling eliquid is “Nora’s Dream” by Aisle 7 (one of my brands) I created the line for a little 2 year old that suffers from cystic fibrosis and her mom is a single mom, we help pay the medical with all the bottles sold. It has won awards all over the world. I really don’t have a favorite eliquid, there are so many to choose from, I have a constant rotation in my tanks.”