Check out the premiere of dino reels 81 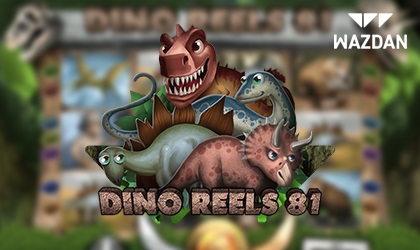 Regardless of how you think the dinosaurs were wiped out 65million years ago, they’re back and very much alive – thanks to Dino Reels 81, the new slot machine from UK and Malta-licensed supplier, Wazdan. Head out on a safari of a lifetime as you play this 4-reel, 7 win line 3D slot machine, which is bursting with plenty of features and base game wins. Make sure you have your volume turned up, as the sounds produced with every spin, will draw you right into the heart of the action. This non-progressive slot machine boasts wins of up to £12,000 – all you have to do is find it!

Symbols featured on the reels include; many different dinosaurs, male and female explorers, mammoth and a sabre-toothed cat. Keep your eyes peeled for the T-rex, as this wild symbol will substitute for all other symbols to hopefully create wins. Not only will the T-rex pay the highest jackpot prize, when a win line full of symbols drops into place, but it will also see the usual reel formation of 7 paylines, expand to a total of 81 win lines; giving even more chances to win big.

A gamble feature is also offered, allowing you to gamble base game wins for more cash. Should you wish to gamble, simply select one of the two metal gates on your screen; one will hold an explorer which will subsequently end the gamble and see you lose your base game win – and the other will have a chunk of meat, which will award the win. Carry on with the gamble until you reach the end of the map or until you decide to cash out or chose the wrong door.

Dino Reels 81 is a highly animated slot machine with an exciting feature, but with it being a medium variance slot, you could be spinning a while before triggering a decent win. Cute dinosaurs and crystal-clear graphics provide on the edge of your seat entertainment, through desktop, mobile and tablet devices. T-rex symbols like to stay hidden for as long as possible, which is hardly surprising as they hold the key to unlocking 81 win lines and big cash.

Also, be sure to check out another of their recent titles, Tetri Mani Deluxe.

Get Fired Up with Burning Sun Slot from Wazdan