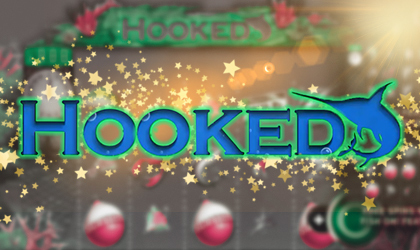 Booming Games, one of the premier software providers in the iGaming industry, has announced the release of a brand-new slot game titled Hooked.

Fans of fishing will absolutely love this release as it brings a similar type of excitement, only in a digital format.

Reeling in the Big Wins:

The developer has chosen the perfect theme for their new slot. This game is all about that fishing life down south, which is more than obvious judging by the Southern drawl heard in the announcer’s voice during the intro.

The game is fairly simple in terms of aesthetics, which suits it well. At least that’s the cause during the base game. Everything takes place underwater. The background depicts the deep blue sea with the…

…occasional outline of fishes swimming by in the distance. The left side of the screen features a fishing net hooked to a typical scale the likes of which you’d see on a fishing market. Overall, the entire slot is geared toward depicting…

…a fishing trip somewhere in the boondocks of Florida or New Orleans. Symbol design features all kinds of sea critters including lobsters, shrimp and a variety of fish.

This being a fishing game, there’s also all kinds of bait popping up on the reels. The only thing that actually stands out is the scatter symbol that comes in the form of a buoy.

The base game runs on the all too familiar 5x3 reel grid. Despite this being a medium to high volatility slot, the real thrill starts when some of the special features are activated. There’s the bonus spin mode as well as the…

…Fish On feature. The latter is all about reeling in the big prizes.

Shane Cotter, Booming Director of Product, offers a great explanation: “This is a game to really up the stake on. Once the player hits the ‘Fish On Feature,’ they get to experience the thrill of high-stakes fishing. Our crew are only interested in netting one of our 3 types of fish per round, maximising the players chance for a full screen of the same major symbol, where they win that symbol’s ‘jackpot.’ This gives the player the opportunity to land up to one thousand times their bet; not to mention 15 juicy lobsters…”

The title is scheduled to go live January 30th.

Booming Games is a software studio founded in 2014 with the goal of creating innovative slot games and other content for the iGaming industry. The company has managed to build a solid…

…reputation during its relatively brief existence. So far, they have released a number of quality slots that have achieved success in several key regulated markets around the world. It works with numerous tier one partners all around the world.

Booming Games Goes for a Thrilling Adventure in Arabian Spins