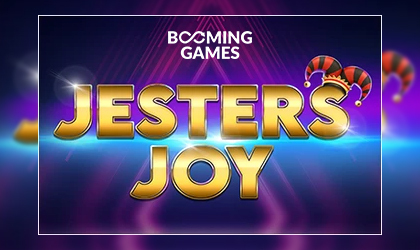 The fruity theme video slot, Jesters Joy, replicates the look of much older slots and doesn't add much in the way of graphics. Players can see it is a mixture of very common classic symbols. The title features a Wild logo, Jester scatter and Wild X7 multiplier, along with other symbols such as lemons, bells, stars, plums and cherries. This game is a classic 3-reel, 3-row and 10-payline slot developed by Booming Games.

Speaking of features, variances, extra spins and wilds are all part of the deal and are welcome. During extra spins, when the game can pay in both directions, the possibility of winning combinations increases. This is a medium-volatility game so there is some risk involved which will increase excitement during play. Eventually what counts as the RTP, so the average player's chances are good. The combination of medium volatility and RTP of 96.23% should give the player reason to try the game, plus they can enjoy great rewards.

Moritz Blume, Booming Games’ Head of Product, says: “Booming Games’ latest and greatest ‘Jesters Joy’ is best described as a classic 3×3 with a modern twist. This low volatility 3×3, 10 payline slot, showcases the best of old-school features, and is sure to be a firm favourite with your entire player base.”

More on the Game Developer:

The company is one of the most famous names in the iGaming industry, well-known for its B2B services, amazingly performing 3D slots and other games. Booming Games launched in 2014, operating from the Isle of Man, and since then, the brand has released over fifty games, including many slots that are especially popular in the growing online casino industry in Asia. Although the brand is a relatively new casino operator in the iGaming industry, its popularity has grown fast, mainly among fans of online slots. Indeed, its popularity has grown very quickly. After spending a few years as an independent brand, the company decided to expand its operations through partnerships with two major providers from Asia: Xin Gaming and Asia Gaming. This is why they opened an office in Manila which gave the company the opportunity to expand its international influence. Now the brand has offices around the globe, including the United Kingdom and Greece. As the company's game library is constantly updated with new exciting games, more and more players decide to try them.