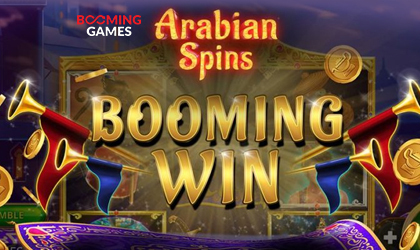 Booming Games, a premier software provider in the iGaming industry, has launched a new game that brings a rather familiar theme.

Players might recognize a certain character who rides on…

…carpets, while there’s also a peculiar oil lamp being shown among the symbol stack. Either way, the supplier has prepared an awesome show for its fans.

The developer’s latest slot game takes place in ancient Arabia and features an eerie resemblance to one of the most popular Disney cartoons. The theme itself is quite detailed.

…players will find themselves in an Arabian city sitting under a scorching sun. Everything is beige with the exception of some planets on nearby balconies, and of course, the purple flying carpet that sits right behind the reels.

Symbol design is what gives this game its identity. Namely, players will encounter sabers, fezzes, and cobras sitting in baskets for the lower-paying tier. The higher paying tier of symbols includes our main character and his pet monkey. The scatter symbol comes in the form of an oil lamp while the wild is represented by a massive diamond. The entire theme is made complete by a very middle eastern soundtrack that ties everything together.

The new title is a fairly classic slot game. It’s based on a 3x3 reel grid and runs on 10 fixed paylines. As far as special features go, there are a few worth mentioning.

For starters, there’s the bonus spin mode that…

…is triggered by having 3 scatters drop on the reels. Once triggered, players can look forward to 10 bonus spins that can be retriggered. Then there’s the x7 multiplier that can randomly appear on the reels, yielding a 7x boost to your wins.

Landing 3 wilds will trigger the 2-way pay feature. Last but not least, the supplier has included the gamble feature in this game, allowing players to gamble their wins and potentially double the stake a few times.

Booming Games is one of the leading software providers in the iGaming industry. The company has made a name for itself by offering innovative features and designing interesting new math models for their games. Speaking of which, its portfolio of games includes some of the most successful titles on the market at the moment.

The supplier also offers completely bespoke game creation as well as various bonus spin campaigns that can be catered to the client’s needs. Such a variety of services and products has allowed it to create a very diverse network of distributors all over the world, to include key regulated markets.