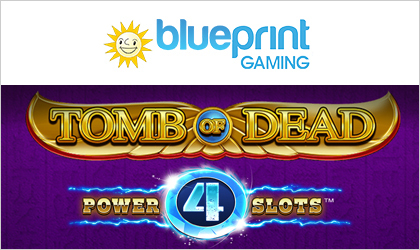 Featuring the increasingly popular Power 4 Slots mechanic, the last launch of Blueprint Gaming slots invites players to the Tomb of the Dead, where untold secrets and winning combinations can be found. The title from a popular slot developer has a classic Egyptian theme with four grids which contain a layout of 5 reels and 3 rows. Players have a huge betting range which goes from $0.4 up to $400, which fits all types of players. This is a medium volatility game with a maximum potential win of 50,000x the bet. In the base game, the golden sarcophagus symbol represents a wild and scatter symbol and in the bonus feature, a massive wheel of fortune will show the players if 5 or 10 extra spins they will trigger during the round.

Tomb of Dead is the third game in Blueprint's Power 4 slots series, in which they transform the popular games from their catalog four times. The first to come out was Fishin 'Frenzy Power 4 slots, then Eye of Horus Power 4 slots. With its latest launch, the supplier has taken the mechanic to a whole new level, offering the same huge potential as their popular Megaways slot, Legacy of Ra.

Jo Purvis, Director of Marketing and Relationships at Blueprint, said: “We’re continuing to hit the ground running in 2021 by launching Tomb of Dead, the latest Blueprint title to feature Power 4 Slots™ that promises an exciting gameplay. Since launching the concept last year, the mechanic has become a real hit with a wide range of players. This latest creation will be hugely appealing to Free Spins fans and those who simply love an Egyptian-themed slot game.”

More About the Brand:

Blueprint Gaming started in 2001 with offices in Atlanta, USA and that year, the German Gauselmann group recognized the potential of the company and acquired a majority stake in the company. The company has a strong focus on regulatory compliance and engages industry experts to oversee game development processes to ensure that their products pass the most stringent compliance checks. The portfolio includes various internet games and mobile games. When its status and market share developed, it opened offices in different countries across the globe, as well as established partnerships with such well-known companies like Bell Fruit Games, Gala Coral Group, Konami, Inspired Gaming Group and many other major game developers.