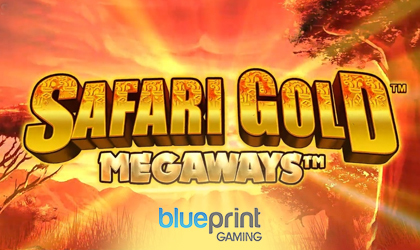 …all familiar Megaways base game mechanic. Blueprint has taken things a step further with an innovative set of features that are bound to keep players at the edge of their seats.

A Thrilling Ride Through and Through:

Blueprint Gaming’s latest release promises to be one of the most exciting games this company has released this year. With a compelling theme that is set somewhere deep in Africa, the title has that captivating quality that is bound to attract and retain players of all backgrounds.

From a graphics standpoint, players can look forward to sunset scenery that is surrounded by tall trees, desert mountain ranges and that orange sky that many associate with the passing of the day in Africa.

Despite being rather simple in terms of aesthetics, the new release features detailed graphics once you look at the symbols. The lower paying deck comes in the form of card royals while the higher-paying deck depicts all kinds of animals found in this part of the world. Players who appreciate some of nature’s most dangerous beasts will find depictions of lions, elephants and leopards and other animals quite interesting.

Megaways to the Core:

As far as the base game goes, this is a Megaways game as the title suggests. That means 6 reels and a variable amount of rows. Aside from this unique base game mechanic from BTG, players can also look forward to a set of interesting special features. Namely, the developer has introduced the Bonus Wheel feature that gives players a chance to win valuable prizes that come in the form of various bonus spin rewards, multipliers and more.

What makes this feature so interesting is the fact that it is exclusively available through the Bonus Bet option that players can access at any time. That way players have much more control over this slot game itself.

Jo Purvis, Director of Marketing and Relationships at Blueprint, offered a comment regarding the release: “Megaways™ has added a new dimension to the slot experience and our newly-developed bonus wheel that features the mechanic is set to take the user journey to the next level. This visually stunning slot with its wild theme is set to grab the attention of players while spinning the wheel adds a new twist to a popular feature.”

The developer is one of the leading providers of slot games and other content for the iGaming industry. It is based in the UK and is one of the premier brands in this market. With a massive portfolio of games, it didn’t take long for the supplier to find itself on the radar of Gauselmann Group – one the largest players in the industry.