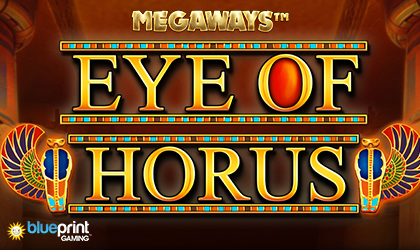 …is combining all of the familiar features of the original with the exciting dynamic brought on by the legendary Megaways core game mechanic.

The developer has released a new version of its popular game called, Eye of Horus Megaways. The game is essentially combining the aesthetics and gameplay of the original…

…with the proven core game solutions of the Megaways mechanic. As far as looks go, fans of the original will feel right at home. The game has a rather mysterious feel to it as it takes place in an Ancient Egyptian temple.

The background image, although static and lacking any complex animations, adds to the experience. During the base game, players are presented with the all familiar ancient temple pillars. However, once you trigger the bonus spin mode, a beam of light washes over the reels…

…and considerably amps up the aesthetic of this slot game. Symbol design has remained the same. Players will find the same card royals symbols in the lower-paying tier. The higher paying tier still includes the Eye of Ra, the kneeling Egyptian hound, and others.

One of the main things that have made the original so popular was the core game experience. When the supplier announced that this famous slot game is getting a Megaways revamp, many were…

…wondering whether this move will preserve the core of what the original is all about. As it turns out, the game is every bit as good as the original, with the added excitement of dynamic reels.

With the new core engine, players can expect a 6x4 dynamic grid that runs on a whopping 15,625 ways to win. This infuses the already interesting game with way more options and chances to win. As far as special features go, those have remained more or less the same.

Players can expect to enjoy expanding wilds and a bonus spin mode that yields up to 12 bonus spins when triggered.

Jo Purvis, Director of Marketing and Relationships at Blueprint, commented on the release: “Fans of Megaways™ are in for a treat as one of Europe’s most played Egyptian-themed games has been transformed to now feature the popular mechanic. Over the previous 12 months, the addition of Megaways™ has proven to be a really effective way to inject new excitement into popular Blueprint games. We’re sure Eye of Horus Megaways™ will be well-received by players in the coming months.”

Blueprint is a software provider that is known for releasing some of the most successful slot games in the industry. Located in the UK, this company was initially operating only within their…

…country’s borders. However, it didn’t take long for them to expand further. It is currently a part of the Guaselmann Group.