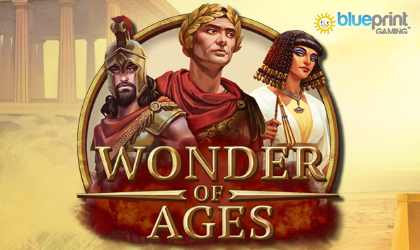 Blueprint Gaming, a slot game specialist and popular software developer, has announced the release of another title that belongs to the Jackpot Kings series of games.

Titled Wonder of Ages, the new game is all about the history and various rulers who have led ancient empires.

Bringing History to the Reels:

The new addition to the series is one of the more interesting slots to hit the market lately.

The team behind this release has…

…taken inspiration from various emperors who’ve led some of the largest and most iconic empires to exist throughout history. The theme itself is all about these characters and wonders of the world their civilizations have left behind.

Players will be able to see the pyramids of Giza and other iconic structures that have marked the development of human civilization. Symbols are straight forward. Instead of card royals, the team behind this release went with roman numerals for the lower-paying set. The higher paying set depicts a number of rulers – all of which are presented in high detail.

The game runs on a 5x3 grid and offers 20 paylines. It is packed with interesting special features.

Those lucky enough to land all five…

…emperors on a winline will be awarded an x200 multiplier. Then there is the bonus spin mode that is triggered when three or more scatters land on the reels. When this happens, players are presented with a mini-game where they’ll need to match 3 coins in order to unlock one of four different bonus spin rounds.

Of course, there’s the Jackpot King Deluxe jackpot that can be activated at any time off of any spin and stake.

Jo Purvis, Director of Marketing and Relationships at Blueprint, said: “Our latest game is a wonder to behold as we unite legends of a bygone era to award big wins through this immersive new slot. With four bonus rounds available and the inclusion of the Jackpot King Deluxe pot adding an extra layer of excitement to every spin, Wonder of Ages is set to become a stellar addition to our ever-expanding portfolio of games.”

Blueprint Gaming is a popular software provider that is known for creating and publishing innovative slot games that feature interesting features. The company has grown to become a trusted partner in the iGaming industry, building a massive network of distributors that includes a number of top tier operators.