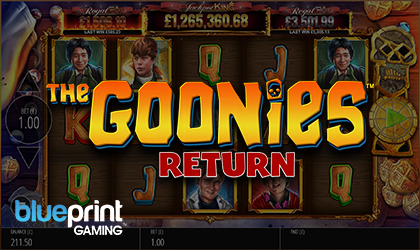 It’s been 37 years since The Goonies first premiered in theaters, but the classic movie feels just as fresh and exciting today as it did back then. And that’s thanks in large part to Blueprint’s new sequel, The Goonies Return. More importantly, it captures the essence of what made the film such a timeless classic: its characters.

Return to the world of Mikey, Data, Mouth, and the rest of the Goonies gang as they search for One-Eyed Willy's treasure. The 5-reel, 3-row game is filled with symbols that fans of the film will recognize, and there are plenty of bonus features to keep things interesting. With an RTP of 96% and medium volatility, Goonies Return offers a decent math model. As for the bonus features, there are wilds, One-Eyed Willy feature, modifiers, a bonus wheel, booby trap feature, special bonus rounds, extra spins, and a gamble feature.

Come and join the Goonies as they return in an all-new adventure that is sure to have players coming back for more. With many bonus features, there’s even more chance of winning big – so make sure you don’t miss out!

Director of Key Accounts and Marketing UK at Blueprint Gaming, Jo Purvis, added: “By popular demand, we have combined an absolute favorite amongst players, The Goonies Return, with the legendary Jackpot King progressive module, resulting in an epic new adventure. The sequel to our classic game featuring the iconic gang proved just as popular as the original. Adding Jackpot King functionality is set to drive even further engagement, as well as open the gameplay to a new audience of jackpot players.”

Getting to Know the Brand:

Blueprint Gaming is a trusted name in the gambling industry, and its products are used by some of the biggest names in the business. With a commitment to quality and innovation, the supplier is sure to continue its success for many years to come. With over 50 years of experience in the casino industry, it delivers various online casino games https://freecasinogames.net/ used by many players across the world. Its most popular games are Winstar, Cleopatra’s Gold, Fortunes of Sparta, Worms Reloaded, and more.