Blueprint Brings the Divine in Legacy of the Gods Megaways 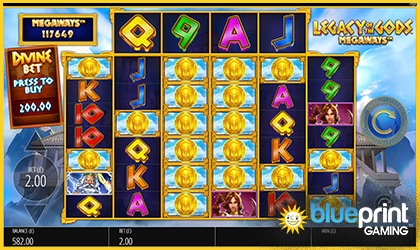 Blueprint Gaming brings a strong divine performance in the Legacy of the Gods Megaways.

This popular software provider and slot game specialist has once more…

…launched a game that offers a potentially impressive experience to those who decide to give it a try. As such, this new game looks promising.

The City of Gods:

The developer has dropped a brand-new slot game that brings the action from the heavens down to the reels.

…the deities that are oddly resembling Greek and Roman mythology. There are lightning bolts, Parthenon-like buildings, and more in this awesome looking game.

The game takes place up high above the clouds. As one would expect, blue is the dominant color. However, it’s not the clear skies that are depicted behind the reels. Instead, players get to see the city of gods in all of its glory. Symbols come in the form of lower-tiered card royals and higher tier symbols that include all kinds of gods and goddesses and more.

As far as slots go, there’s rarely a more popular base game system than the Megaways. There is something about the dynamic reels and rows that attract players and makes the whole experience much more thrilling.

However, the supplier has gone a step further and added several interesting features to the game. Namely, players get to experience a bonus spin mode that allows them to choose the volatility and win multipliers that can increase by up to 3 on every cascade.

Then there’s the Mystery Symbol that can create even more chances to win. Lastly, we’ve got the Divine Bonus Bet that can guarantee a Bonus Spin mode.

Jo Purvis, Director of Marketing and Relationships at Blueprint, commented on the new release: “The Gods have the power to award huge wins in our latest game release while cascading wins and the Megaways™ mechanic are sure to make for explosive gameplay. The bonus round is made even more exciting as players decide their fate by choosing the free spins and win multiplier rate. This epic slot is set to make an exciting addition to any operator’s online offering.”

Blueprint Gaming is a software provider that is specialized in creating and distributing high-end slot games for the iGaming market. The company is currently offering a diverse portfolio of immersive games that are being distributed through a far-reaching network of operators. This network includes a number of top tier operators who are working in highly competitive markets.

Legacy of the Gods Megaways
304
PLAY