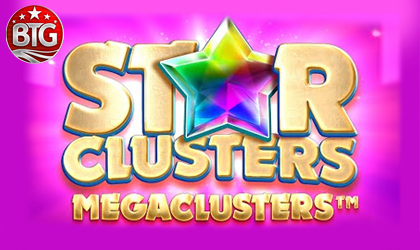 Big Time Gaming, one of the leading software providers in the iGaming industry, has announced the release of a brand-new slot game titled Star Clusters.

…isn’t just a fresh addition to this company’s portfolio. The supplier is actually introducing a fresh base game mechanic called Megaclusters!

The developer is once again bringing massive innovation to the reels. The company that completely revolutionized the world of slots with its legendary Megaways mechanic, is releasing another base game genre called Megaclusters, perfectly paired with its newest game

As far as aesthetics go, this latest title is a pretty straightforward game. Players are presented with a solid color, an animated background that is pulsing in the beat of the music.

Depending on what’s happening on the reels, the background…

…can change colors. Symbol design is simple. Considering that this game is all about showcasing the new mechanic, what better way to visually help this effort than to go with gems? Lower higher-paying tiers of symbols are both packed with various types of gems, which give the game a very colorful appearance.

Fans of this genre will definitely appreciate the visuals this slot game has to offer. Lastly, the music also plays an important part in this experience.

The new release has a progressive number of reels/rows. Namely, the game starts out as a 4x4 layout, only to turn into 6x6 and possibly 8x8.

That being said, players will notice that…

…this progression isn’t linear. There can be situations where most of the grid is 4x4 or 6x6 but some portions are 8x8. In fact, this is what Megaclusters base game mechanics is all about.

When players score a winning spin, the…

…winning symbols are replaced with a cluster of new symbols. For example, a winning symbol in the starting 4x4 layout will turn into several symbols, thus transforming that part of the reels into a 6x6 grid.

This new base game offers a great deal of flexibility that might make it as successful as the supplier’s now-legendary Megaways mechanic.

Big Time Gaming is by far one of the most legendary software providers in the iGaming industry. The company isn’t known so much for its slots as it is known for its ability to innovate. Its Megaways mechanic has revolutionized the way we play slot games, adding much more substance to this old form of entertainment. Over time, its base game innovations were licensed to just about every major software provider in the industry.