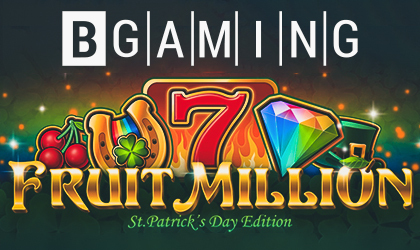 According to the legend, a four-leaf clover founded on St. Patrick's Day brings money and happiness. It's indeed a daunting task, but thanks to BGaming developers, players have a great opportunity with their latest edition of the Fruit Million slot. The developers captured the atmosphere of St. Patrick's holiday and put this energy into the new design of the popular format of the Fruit Million slot.

This is a 5-reel, 4-row title with a high RTP of 97.10% which is way above the average these days. As for the symbols, there are horseshoes, magical leprechaun hats, and of course, lucky four-leaf clovers and features such as expanded wilds and scatters that turn into 100 active paylines for fantastic payouts. Great reel design is accompanied by cheerful Irish music. The title changes its appearance for every holiday and spreads joy for Halloween, Christmas, Valentine's Day, St. Patrick's Day, Eastern and more. The new release is the most successful slot launched by this provider and December’s version of this title reached, in 10 days, the top eight of the 100M-GGR casino.

The developer always prepares something special for holidays, this time everything is ready for the Irish holiday, plus the supplier has a lot to offer with this title!

Marina Ostrovtsova, BGaming director, commented: “We know that new games come and go on a regular basis. We wanted a long-lasting piece of content. Thus we came up with the idea of the ‘chameleon’ slot. The game that changes its appearance depending on what is going on in the world. The slot that can always be on point!”

BGaming’s history starts more than a decade ago, in 2008 with SoftSwiss, a leading casino operator and a company that provides gambling solutions created by various developers around the globe. The latter began creating its own casino games in 2012, and the BGaming brand started operating in February 2018 when SoftSwiss developed another division within the company that was created specifically to build content for online casinos. Its creative development team is filled with talented engineers, artists, and designers.