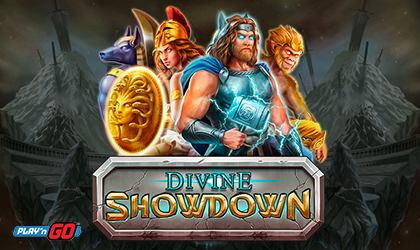 Creative content developer Play’n GO expanded the collection with Divine Showdown, a unique slot that brings a divine quartet comprised of Gods from versatile mythologies. Wukong, the Chinese monkey king, Anubis, the Egyptian god of the death, the Norse god of thunder, Thor, and the Greek goddess of wisdom and war, Athena play the main characters and the high-paying symbols of the game.

Gathering the mighty figures in a single game, the studio managed to optimize the game to cater to diverse preferences and fans of all sorts of mythology-themed releases. The well-designed slot is available starting December 12.

“Mythologies are extremely popular in all forms of entertainment but they very rarely ever crossover with each other in any way. We wanted an imaginative concept for this game and, with the scope each mythology brings to the title, it brings a new perspective on a popular genre and adds a great deal of excitement to the gameplay.”

The Victorious Battle Is About to Begin:

The game is accommodated on a 3x5 diagram, with 20 fixed lines which pay left to right. As for the special symbols, this slot hosts Scatter, Wild and 5 royal symbols. The highlight of the mythological saga is the interactive bonus feature…

…where punters are given the opportunity to select one of the four Gods which will be their representative in the battle against the other three.

Battle Reel determines the course of the action and if it hits the SPIN symbol, the feature keeps on playing. In case it lands on a God symbol, it initiates the battle against that God. If the outcome of the Battle is positive, a feature with the chosen power is played. If the outcome is negative, life is subtracted, and spin joins the opposing God’s Power active. When all lives are lost, extra spins terminate.

When 3 Scatters appear on the reels…

…they initiate additional rounds. Each of them starts with 3 lives, and while the feature is on the Gods’ special powers will be active on all standard spins. Moreover, during random rounds, the Multiplier Reel will initiate and award a booster of up to x10 to any spin.

Journey to Egypt…and Wherever You Want!

The mythology-inspired creation comes shortly after the introduction of the Ankh of Anubis, a video slot with the diamond-shaped grid. Besides the unusual and action-packed gameplay, the release is packed with 10, 15 or 20 complimentary spins, depending on the number of bonus symbols. Traveling through time has never been easier…

…and Chronos Joker knows that the best. Manipulating the time in the most skillful manner, the game brings numerous portions of multipliers and a whole collection of artistically designed symbols.