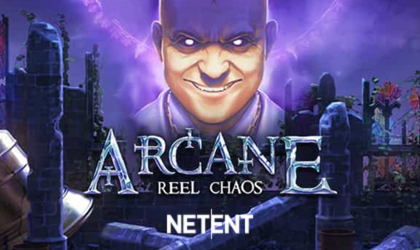 In every company we can find someone who stands out but not always in a good way. That’s life and sometimes we must figure out either how to ignore them or to simply deal with them in the best possible way.

It looks like the creators of this game had that type of person nearby and were obviously very inspired by them so they’ve made a game as either an homage or as a reminder. It’s titled, Arcane Reel Chaos, and it’s quite an adventure!

What To Do With Him?

We all know that there’s a solution to every problem, so keep that in mind during gameplay. Yes, players may encounter some obstacles due to the fact that they’ll be dealing with a serious troublemaker, however, nothing is unsolvable.

Leading software developer, NetEnt has created a very nasty and mischievous guy called, Deep Pockets. He is here to spice things up and make your virtual life a living hell.

Deep Pockets doesn’t torture a group of people only but the entire city, though players shouldn’t be intimidated by him because just like in real life, there are fearless people in this game that are going to try to scare him away!

The slot comes with five reels, three rows and twenty pay lines. It revolves around four brave individuals that are doing everything that’s in their power to keep this town safe from this maleficent person.

Following its previous Golden Grimoire release, this one is quite different in comparison and plans to keep players on the edge of their seats.

Let’s go back to our courageous people. Their names are Flare, Chronos, Zero.x and Psyop and each of these characters comes with different super powers. With them players can grab various multiplliers, multiplying re-spins, stacked wilds and other amazing things.

Certainly, the most exciting part of the game is slot spins during which a bet line multiplier is increased if one of heroes successfully defeats Deep Pockets. Once this occurs, this multiplier gives up to four times the bet line win.

Furthermore, if all of them manage to defeat this bad dude, gamers will be bestowed with a spectacular Victory Bonus!

Generally speaking, this game is placed inside of dystopian futuristic world and it is steeped in the occult. During the game, we will find out that actually the wicked scatter character isthe main cause of Deep Pocket’s evil personality.

All these brave characters are here to fight against him and bring long awaited peace to this city, therefore, it is crucial for every single player to give their best to help them accomplish this goal. Are you ready for it?