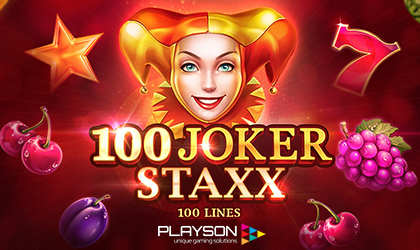 It seems like jesters are one of the favorite characters of Playson, a leading gaming company. Namely, they have just released a video slot called 100 Joker Staxx and not too long ago, they launched its predecessor, 40 Joker Staxx.

The Difference Between The Two Versions:

This company is widely known not only for that love of jokers, but you can often come across different interesting members of the reels, such as clowns, jacks, harlequins and many others.

Now, when it comes to this latest edition, we must admit that there are some similarities between these two.

It (40 Joker Staxx) contains almost exactly the same gameplay, notwithstanding with a smaller amount of pay lines.

Moreover, in the new one, users will be able to use one-hundred of them, with plethora of stacked symbols and also cheap stakes will be at their disposal too!

Solid Wins With This One:

Playson love to treat their players by developing a game that is pretty rewarding, plus not expensive to play.

With one-hundred pay lines, everyone has plentiful opportunities to score big time, and they can do that with only 20p per spin!

On the other hand, bigger stakes can also be wagered, however, they cannot surpass 100 pounds per single spin!

Nice-looking Fruits are not here to serve as ornaments only, they can also help you potentially earn lots of money, which can go as high as 5x the total amount you invested!

If by any chance you successfully land wins that contain bars characters, bells or either golden or red sevens, you will be rewarded with up to 12.5x a stake paid out.

It’s worth mentioning that this game doesn’t come with some breathtaking bonuses, however, there are various signs that could sooth your ride and make you feel cozy.

For instance, the wild symbol can replace all other paying icons in this reel slot. They change their appearance by turning into a jester’s hat and they can reward you with prizes of up to 50x a bet!

Moreover, scatter star signs will bestow you with gifts wherever they are seen across the reels. We can blame them for the non-progressive jackpot money prize as well as the other ones, worth earning.

If five of them are spotted on the reels you will get a jackpot worth 200x a stake paid out!

As we mentioned in the beginning, this isn’t the first game with Joker and it surely isn’t going to be the last one.

They’ve already launched Fruits & Jokers, Joker Expand and Joker Staxx slots, but in the future we can expect more of these silly entertainers!