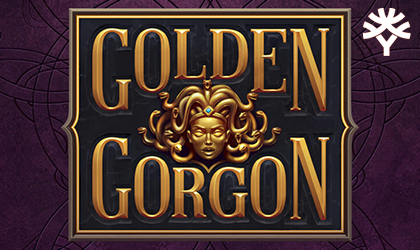 Again, it is ancient Greek mythology that gives the developer the inspiration for its latest slot. This time, Medusa returns, and it looks like we also have Perseus on the grid in the Yggdrasil’s online slot Golden Gorgon.

The action takes place on 5 reels, 3 rows, and 25 active paylines. The game has an RTP of 96%. The maximum potential win is 2500x the bet, while the betting range is quite big; therefore, a minimum betting option is $0.25 and the maximum betting option is $400. With at least 3 corresponding symbols, the re-spins are activated. As for other features, there are also multipliers.

The game has an interesting re-spin feature that will surely attract many players. Otherwise, the layout remains fairly simple and depends primarily on one mechanic!

Stuart McCarthy, Yggdrasil Head of Product and Programs, said: “Golden Gorgon takes straightforward gameplay that appeals to classic slots fans and adds a thrilling respin feature with massive multiplier potential. The immersive environment transports players back to the heroes of mythology and we can’t wait to see how players react to this high volatility hit.”

The name and logo of the online casino provider, Yggdrasil, is inspired by ancient Norse mythology. This supplier houses many epic and exciting online casino games within its portfolio. The brand was established in 2013 with its first license and was not initially the best option in the industry, but it accomplished a lot in just a few years. In 2014, the provider developed the iSense platform, which allows full customization of new versions of games on mobile and desktop devices. In 2015, the team developed the Boost promotion tool, and the following year introduced the social media tool, Brag, which allows players to celebrate great victories with friends. The group has worked hard to build its reputation over the years and has been recognized for its innovative content, and the company has won the prestigious Innovator of the Year award in 2017, 2018, 2019 and 2020 at the International Gaming Awards.