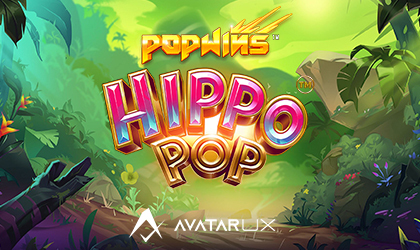 Yggdrasil Gaming in partnership with Hong Kong studio AvatarUX takes players on a journey with the colorful HippoPop online slot. This title is based on PopWins mechanics, and the action takes place in a bright, magical jungle.

There are 5 reels, 3 rows, and 486 active paylines. Thanks to PopWins, the number of active paylines goes up to 65,436. With the help of bonus features, players can hope for a maximum potential win of 48,150 the bet or $1,936,000. As for bonus features, there are cascades, PopWins mechanics, multipliers, and extra spins. It has an RTP of 96.10%. The betting range is decent, and the maximum betting option is $40, while the minimum bet required for spinning the reels is $0.20.

The game was developed as part of the YG Masters program and is supported with cutting-edge technology, GATI, which enabled AvatarUX to use standardized, pre-configured development tools to create this game!

Stuart McCarthy, Yggdrasil's Head of Partner Programs, said: “AvatarUX’s PopWins content has been a huge success and the titles were some of our top-performers last year with players really enjoying the mechanics that offer an element of daring and excitement."

Marcus Honney, Managing Director at AvatarUX, said: “Along with a feelgood summer vibe and HippoPop™’s quirky theme, it is also fused with advanced slot mechanics to create one of the smartest and most fun games of the year. The fusion of epic themes and powerful bonus mechanics, makes HippoPop™ a must have slot for online casinos looking to deliver in-demand games.”

The team behind Yggdrasil Gaming presents itself as revolutionary in the iGaming world. The company was established in 2013, with its first license, and at the beginning, it was hard to stand out in the competitive market, however, this brand achieved a lot in just a few years. A year later, in 2014, the brand launched an innovative iSense platform, which allows new versions of games to be fully responsive on mobile and desktop devices. In 2015, the team developed the Boost promotion tool, and in 2016, it introduced another innovative social media tool Brag, which allows players to celebrate wins with friends. The company has been recognized for its success, and they won the award for Innovator of the Year in 2019, 2018 and in 2017 at the International Gaming Awards.